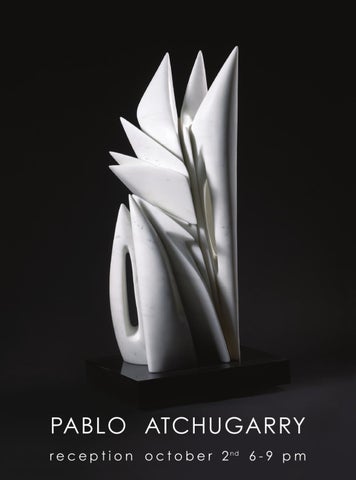 RECENT SCULPTURE One of the world’s preeminent contemporary sculptors, Pablo Atchugarry returns to New Orleans this October for his second solo show at Gallery Bienvenu. Atchugarry, winner of the 2002 Michelangelo Prize, will exhibit abstract marble sculptures that range from medium- to large-scale, each work conveying his signature integration of delicacy, dynamism, and compositional drama. Since 1979 the artist’s primary medium has been marble from the illustrious quarries of Carrara, a conscious nod to the historical legacies of Classical, Renaissance, and Baroque sculpture. “The material itself brings a lot of cultural baggage with it,” he told an interviewer in 2006. “It’s a great challenge for a contemporary artist to impose his personal expression and design on such a historical material.” Predominantly vertical, Atchugarry’s works communicate aspiration and ascension in a way that recalls Constantine Brancusi’s masterpiece, Bird in Space. They are by turns playful, elegant, and majestic, their origami-like shapes and nested planes conveying a sense of lightness and movement, rhythm and visual counterpoint. Diagonal motifs counterbalance the vertical thrust, suggesting biomorphic forms undergirded by architectonic structure. Born in Uruguay, the artist has for many years lived in Lecco, Italy, site of a museum permanently exhibiting his works and archives. His work appears in some of the world’s most celebrated collections. During the course of a brilliant career he has been awarded prestigious public commissions and designed monumental pieces, the largest of which stands 26 feet tall and weighs in excess of 33 tons. One of his most affecting sculptures, Ideali, commemorated the 50th year of the late Prince Rainier III’s reign over the Principality of Monaco. In 2003 he exhibited in the Venice Biennale, followed in 2005 by an exhibition at the National Museum of Fine Arts, Buenos Aires. In 2006 he was the subject of a major retrospective at the Groningen Museum in Bruges, Belgium. “My images,” he reflects, “are a search for the possibility of living in harmony with each other and with nature, in which contrasts and contradictions should be cherished.” These contrasts manifest in the sculptures in a duet between thick and lithe contours, between liquidic sheen on broad surfaces and scissorsharp shadowplay on wafer-thin slices. At the intersection of simplicity and complexity, primordial and futuristic, Atchugarry’s work speaks in ecstatic visual poetry of uplift, optimism, and beauty.