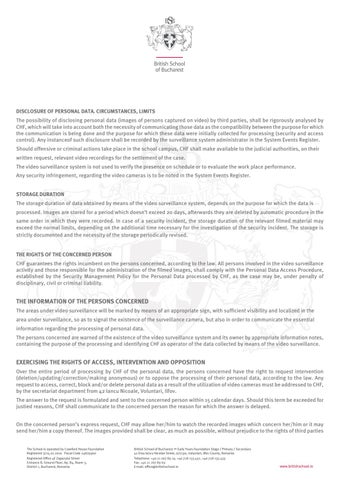 DISCLOSURE OF PERSONAL DATA. CIRCUMSTANCES, LIMITS The possibility of disclosing personal data (images of persons captured on video) by third parties, shall be rigorously analysed by CHF, which will take into account both the necessity of communicating those data as the compatibility between the purpose for which the communication is being done and the purpose for which these data were initially collected for processing (security and access control). Any instanceof such disclosure shall be recorded by the surveillance system administrator in the System Events Register. Should offensive or criminal actions take place in the school campus, CHF shall make available to the judicial authorities, on their written request, relevant video recordings for the settlement of the case. The video surveillance system is not used to verify the presence on schedule or to evaluate the work place performance. Any security infringement, regarding the video cameras is to be noted in the System Events Register. STORAGE DURATION The storage duration of data obtained by means of the video surveillance system, depends on the purpose for which the data is processed. Images are stored for a period which doesn’t exceed 20 days, afterwards they are deleted by automatic procedure in the same order in which they were recorded. In case of a security incident, the storage duration of the relevant filmed material may exceed the normal limits, depending on the additional time necessary for the investigation of the security incident. The storage is strictly documented and the necessity of the storage periodically revised. THE RIGHTS OF THE CONCERNED PERSON CHF guarantees the rights incumbent on the persons concerned, according to the law. All persons involved in the video surveillance activity and those responsible for the administration of the filmed images, shall comply with the Personal Data Access Procedure, established by the Security Management Policy for the Personal Data processed by CHF, as the case may be, under penalty of disciplinary, civil or criminal liability.

EXERCISING THE RIGHTS OF ACCESS, INTERVENTION AND OPPOSITION Over the entire period of processing by CHF of the personal data, the persons concerned have the right to request intervention (deletion/updating/correction/making anonymous) or to oppose the processing of their personal data, according to the law. Any request to access, correct, block and/or delete personal data as a result of the utilization of video cameras must be addressed to CHF, by the secretariat department from 42 Iancu Nicoale, Voluntari, Ilfov. The answer to the request is formulated and sent to the concerned person within 15 calendar days. Should this term be exceeded for justied reasons, CHF shall communicate to the concerned person the reason for which the answer is delayed. On the concerned person’s express request, CHF may allow her/him to watch the recorded images which concern her/him or it may send her/him a copy thereof. The images provided shall be clear, as much as possible, without prejudice to the rights of third parties The School is operated by Crawford House Foundation Registered 3/25.01.2016 Fiscal Code 24879960