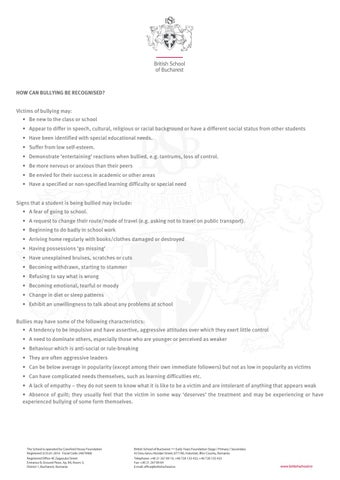 HOW CAN BULLYING BE RECOGNISED? Victims of bullying may: • Be new to the class or school • Appear to differ in speech, cultural, religious or racial background or have a different social status from other students • Have been identified with special educational needs. • Suffer from low self-esteem. • Demonstrate ‘entertaining’ reactions when bullied, e.g. tantrums, loss of control. • Be more nervous or anxious than their peers • Be envied for their success in academic or other areas • Have a specified or non-specified learning difficulty or special need Signs that a student is being bullied may include: • A fear of going to school. • A request to change their route/mode of travel (e.g. asking not to travel on public transport). • Beginning to do badly in school work • Arriving home regularly with books/clothes damaged or destroyed • Having possessions ‘go missing’ • Have unexplained bruises, scratches or cuts • Becoming withdrawn, starting to stammer • Refusing to say what is wrong • Becoming emotional, tearful or moody • Change in diet or sleep patterns • Exhibit an unwillingness to talk about any problems at school Bullies may have some of the following characteristics: • A tendency to be impulsive and have assertive, aggressive attitudes over which they exert little control • A need to dominate others, especially those who are younger or perceived as weaker • Behaviour which is anti-social or rule-breaking • They are often aggressive leaders • Can be below average in popularity (except among their own immediate followers) but not as low in popularity as victims • Can have complicated needs themselves, such as learning difficulties etc. • A lack of empathy – they do not seem to know what it is like to be a victim and are intolerant of anything that appears weak • Absence of guilt; they usually feel that the victim in some way ‘deserves’ the treatment and may be experiencing or have experienced bullying of some form themselves.