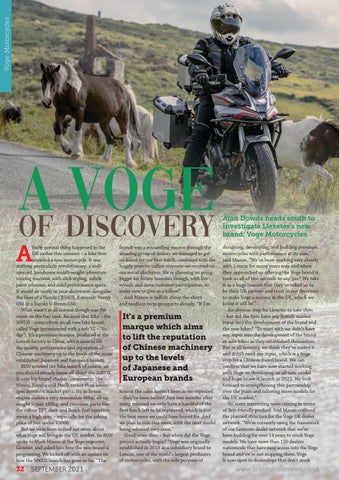 A Voge of discovery

fairly normal thing happened in the UK earlier this summer – a bike firm unveiled a new motorcycle. It was nothing particularly revolutionary: a wellspecced, handsome middleweight adventure touring machine, with slick styling, subtle paint schemes, and solid performance specs. It would sit nicely in your showroom alongside the likes of a Honda CB500X, Kawasaki Versys 650 or a Suzuki V-Strom 650. What wasn’t at all normal though was the name on the fuel tank. Because that bike – the 500DS – comes from an all-new bike brand, called Voge (pronounced with a soft ‘G’ – ‘Vodge’). It’s a premium marque, produced at the Loncin factory in China, which aims to lift the quality, performance and reputation of Chinese machinery up to the levels of the more established Japanese and European brands. BDN covered the bike launch of course, so you should already know all about the 500DS. It uses big-brand chassis components like Nissin, Kayaba and Pirelli rather than lowerspec domestic market parts. Its in-house engine makes a very reasonable 46hp, all-up weight is just 188kg, and premium parts like the colour TFT dash and Bosch fuel injection mean a high spec – especially for the asking price of just under £5000. But we were keen to find out more about what Voge will bring to the UK market. So BDN spoke to Mark Mason at the Voge importer, Llexeter, and asked him how the new brand is progressing. We kicked off with an update on how the 500DS launch has gone so far. “The

launch was a resounding success through the amazing group of dealers we managed to get on board for our first batch, combined with the hugely positive online response we received on our social platforms. We’re planning on going bigger for future launches though, with live reveals and more customer participation, so make sure to give us a follow!” And Mason is bullish about the short and medium term prospects already. “If I’m

It’s a premium marque which aims to lift the reputation of Chinese machinery up to the levels of Japanese and European brands honest the sales haven’t been as we expected – they’ve been better! Just two months after being released we only have a handful of the first batch left to be registered, which is just the best news we could have hoped for. And we plan to ride this wave, with the next model being released very soon.” Good news then – but when did the Voge project actually begin? “Voge was originally established in 2018 as a subsidiary brand to Loncin, one of the world’s largest producers of motorcycles, with the sole purpose of

Alan Dowds heads south to investigate Llexeter’s new brand, Voge Motorcycles designing, developing, and building premium motorcycles with performance at its core,” said Mason. “We’ve been working very closely with Loncin for many years now and when they approached us offering the Voge brand it took us all of two seconds to say ‘yes’! We take it as a huge honour that they’ve asked us to be their UK partner and trust in our decisions to make Voge a success in the UK, which we know it will be.” An obvious step for Llexeter to take then – but did the firm have any British market input into the development of the brand and the new bikes? “To start with we didn’t have any input into the development of the brand or new bikes as they established themselves. But in all honesty, we think they’ve nailed it and didn’t need our input, which is a huge step for a Chinese-based brand. We can confirm that we have now started working with Voge on developing an all-new model and hope to see it launch in 2022. We look forward to strengthening this partnership over the years and tailoring more models for the UK market.” So, some interesting news coming in terms of Brit-friendly product. And Mason outlined the planned structure for the Voge UK dealer network. “We’re currently using the framework of our Lexmoto dealer network that we’ve been building for over 14 years to stock Voge models. We have more than 150 dealers nationwide that have easy access into the Voge brand and we’re not stopping there. Voge is now open to dealerships that don’t stock