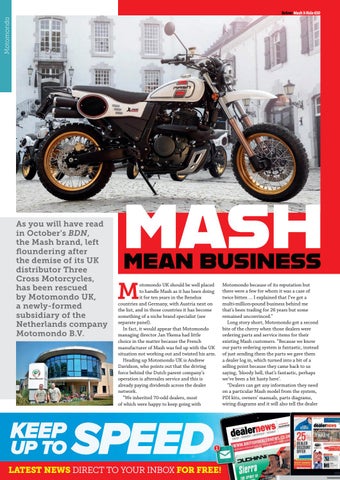 As you will have read in October’s BDN, the Mash brand, left floundering after the demise of its UK distributor Three Cross Motorcycles, has been rescued by Motomondo UK, a newly-formed subsidiary of the Netherlands company Motomondo B.V.

otomondo UK should be well placed to handle Mash as it has been doing it for ten years in the Benelux countries and Germany, with Austria next on the list, and in those countries it has become something of a niche brand specialist (see separate panel). In fact, it would appear that Motomondo managing director Jan Ykema had little choice in the matter because the French manufacturer of Mash was fed up with the UK situation not working out and twisted his arm. Heading up Motomondo UK is Andrew Davidson, who points out that the driving force behind the Dutch parent company’s operation is aftersales service and this is already paying dividends across the dealer network. “We inherited 70-odd dealers, most of which were happy to keep going with

42 NOVEMBER LATEST NEWS2020 DIRECT TO YOUR INBOX FOR FREE!

Motomondo because of its reputation but there were a few for whom it was a case of twice bitten … I explained that I’ve got a multi-million-pound business behind me that’s been trading for 26 years but some remained unconvinced.” Long story short, Motomondo got a second bite of the cherry when those dealers were ordering parts and service items for their existing Mash customers. “Because we know our parts ordering system is fantastic, instead of just sending them the parts we gave them a dealer log in, which turned into a bit of a selling point because they came back to us saying, ‘bloody hell, that’s fantastic, perhaps we’ve been a bit hasty here’. “Dealers can get any information they need on a particular Mash model from the system, PDI kits, owners’ manuals, parts diagrams, wiring diagrams and it will also tell the dealer