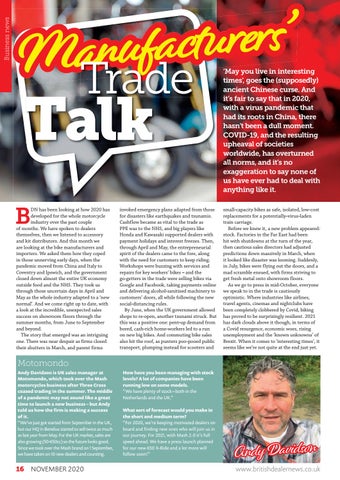 ‘May you live in interesting times’, goes the (supposedly) ancient Chinese curse. And it’s fair to say that in 2020, with a virus pandemic that had its roots in China, there hasn’t been a dull moment. COVID-19, and the resulting upheaval of societies worldwide, has overturned all norms, and it’s no exaggeration to say none of us have ever had to deal with anything like it.

DN has been looking at how 2020 has developed for the whole motorcycle industry over the past couple of months. We have spoken to dealers themselves, then we listened to accessory and kit distributors. And this month we are looking at the bike manufacturers and importers. We asked them how they coped in those unnerving early days, when the pandemic moved from China and Italy to Coventry and Ipswich, and the government closed down almost the entire UK economy outside food and the NHS. They took us through those uncertain days in April and May as the whole industry adapted to a ‘new normal’. And we come right up to date, with a look at the incredible, unexpected sales success on showroom floors through the summer months, from June to September and beyond. The story that emerged was an intriguing one. There was near despair as firms closed their shutters in March, and parent firms

invoked emergency plans adapted from those for disasters like earthquakes and tsunamis. Cashflow became as vital to the trade as PPE was to the NHS, and big players like Honda and Kawasaki supported dealers with payment holidays and interest freezes. Then, through April and May, the entrepreneurial spirit of the dealers came to the fore, along with the need for customers to keep riding. Workshops were buzzing with services and repairs for key workers’ bikes – and the go-getters in the trade were selling bikes via Google and Facebook, taking payments online and delivering alcohol-sanitised machinery to customers’ doors, all while following the new social-distancing rules. By June, when the UK government allowed shops to re-open, another tsunami struck. But this was a positive one: pent-up demand from bored, cash-rich home-workers led to a run on new big bikes. And commuting bike sales also hit the roof, as punters poo-pooed public transport, plumping instead for scooters and

small-capacity bikes as safe, isolated, low-cost replacements for a potentially-virus-laden train carriage. Before we knew it, a new problem appeared: stock. Factories in the Far East had been hit with shutdowns at the turn of the year, then cautious sales directors had adjusted predictions down massively in March, when it looked like disaster was looming. Suddenly, in July, bikes were flying out the doors, and a mad scramble ensued, with firms striving to get fresh metal onto showroom floors. As we go to press in mid-October, everyone we speak to in the trade is cautiously optimistic. Where industries like airlines, travel agents, cinemas and nightclubs have been completely clobbered by Covid, biking has proved to be surprisingly resilient. 2021 has dark clouds above it though, in terms of a Covid resurgence, economic woes, rising unemployment and the ‘known unknowns’ of Brexit. When it comes to ‘interesting times’, it seems like we’re not quite at the end just yet.

Motomondo Andy Davidson is UK sales manager at Motomondo, which took over the Mash motorcycles business after Three Cross ceased trading in the summer. The middle of a pandemic may not sound like a great time to launch a new business – but Andy told us how the firm is making a success of it. “We’ve just got started from September in the UK, but our HQ in Benelux started to sell twice as much as last year from May. For the UK market, sales are also growing (50-650cc) so the future looks good. Since we took over the Mash brand on 1 September, we have taken on 10 new dealers and counting.

How have you been managing with stock levels? A lot of companies have been running low on some models. “We have plenty of stock – both in the Netherlands and the UK.” What sort of forecast would you make in the short and medium term? “For 2020, we’re keeping motivated dealers on board and finding new ones who will join us in our journey. For 2021, with Mash 2.0 it’s full speed ahead. We have a press launch planned for our new 650 X-Ride and a lot more will follow soon!”