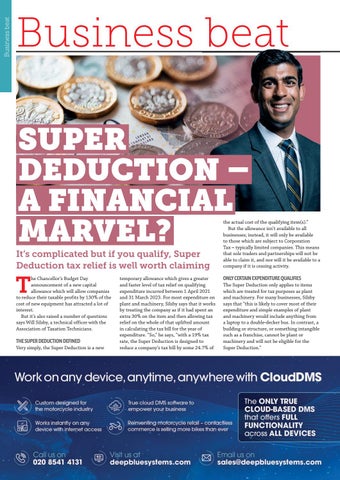 It’s complicated but if you qualify, Super Deduction tax relief is well worth claiming

he Chancellor’s Budget Day announcement of a new capital allowance which will allow companies to reduce their taxable profits by 130% of the cost of new equipment has attracted a lot of interest. But it’s also raised a number of questions says Will Silsby, a technical officer with the Association of Taxation Technicians.

THE SUPER DEDUCTION DEFINED Very simply, the Super Deduction is a new

temporary allowance which gives a greater and faster level of tax relief on qualifying expenditure incurred between 1 April 2021 and 31 March 2023. For most expenditure on plant and machinery, Silsby says that it works by treating the company as if it had spent an extra 30% on the item and then allowing tax relief on the whole of that uplifted amount in calculating the tax bill for the year of expenditure. “So,” he says, “with a 19% tax rate, the Super Deduction is designed to reduce a company’s tax bill by some 24.7% of

the actual cost of the qualifying item(s).” But the allowance isn’t available to all businesses; instead, it will only be available to those which are subject to Corporation Tax – typically limited companies. This means that sole traders and partnerships will not be able to claim it, and nor will it be available to a company if it is ceasing activity.

ONLY CERTAIN EXPENDITURE QUALIFIES The Super Deduction only applies to items which are treated for tax purposes as plant and machinery. For many businesses, Silsby says that “this is likely to cover most of their expenditure and simple examples of plant and machinery would include anything from a laptop to a double-decker bus. In contrast, a building or structure, or something intangible such as a franchise, cannot be plant or machinery and will not be eligible for the Super Deduction.”