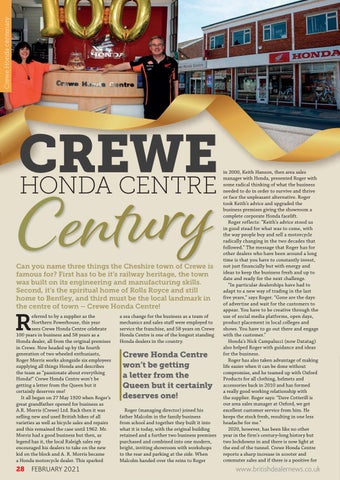 Can you name three things the Cheshire town of Crewe is famous for? First has to be it’s railway heritage, the town was built on its engineering and manufacturing skills. Second, it’s the spiritual home of Rolls Royce and still home to Bentley, and third must be the local landmark in the centre of town – Crewe Honda Centre!

eferred to by a supplier as the Northern Powerhouse, this year sees Crewe Honda Centre celebrate 100 years in business and 58 years as a Honda dealer, all from the original premises in Crewe. Now headed up by the fourth generation of two wheeled enthusiasts, Roger Morris works alongside six employees supplying all things Honda and describes the team as “passionate about everything Honda!” Crewe Honda Centre won’t be getting a letter from the Queen but it certainly deserves one! It all began on 27 May 1920 when Roger’s great grandfather opened for business as A.R. Morris (Crewe) Ltd. Back then it was selling new and used British bikes of all varieties as well as bicycle sales and repairs and this remained the case until 1962. Mr. Morris had a good business but then, as legend has it, the local Raleigh sales rep encouraged his dealers to take on the new kid on the block and A. R. Morris became a Honda motorcycle dealer. This sparked

a sea change for the business as a team of mechanics and sales staff were employed to service the franchise, and 58 years on Crewe Honda Centre is one of the longest standing Honda dealers in the country.

Crewe Honda Centre won’t be getting a letter from the Queen but it certainly deserves one! Roger (managing director) joined his father Malcolm in the family business from school and together they built it into what it is today, with the original building retained and a further two business premises purchased and combined into one modern, bright, inviting showroom with workshops to the rear and parking at the side. When Malcolm handed over the reins to Roger

in 2000, Keith Hanson, then area sales manager with Honda, presented Roger with some radical thinking of what the business needed to do in order to survive and thrive or face the unpleasant alternative. Roger took Keith’s advice and upgraded the business premises giving the showroom a complete corporate Honda facelift. Roger reflects: “Keith’s advice stood us in good stead for what was to come, with the way people buy and sell a motorcycle radically changing in the two decades that followed.” The message that Roger has for other dealers who have been around a long time is that you have to constantly invest, not just financially but with energy and ideas to keep the business fresh and up to date and ready for the next challenge. “In particular dealerships have had to adapt to a new way of trading in the last five years,” says Roger. “Gone are the days of advertise and wait for the customers to appear. You have to be creative through the use of social media platforms, open days, product placement in local colleges and shows. You have to go out there and engage with the customer.” Honda’s Nick Campalucci (now Datatag) also helped Roger with guidance and ideas for the business. Roger has also taken advantage of making life easier when it can be done without compromise, and he teamed up with Oxford Products for all clothing, helmets and accessories back in 2010 and has formed a really good working relationship with the supplier. Roger says: “Dave Cotterill is our area sales manager at Oxford, we get excellent customer service from him. He keeps the stock fresh, resulting in one less headache for me.” 2020, however, has been like no other year in the firm’s century-long history but two lockdowns in and there is now light at the end of the tunnel. Crewe Honda Centre reports a sharp increase in scooter and commuter sales and if there is a positive for