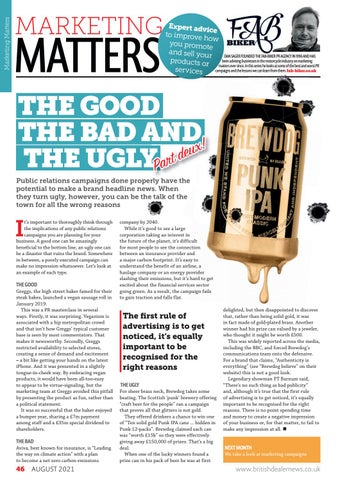 THE GOOD THE BAD ANDx! u e d t THE UGLYPar

Public relations campaigns done properly have the potential to make a brand headline news. When they turn ugly, however, you can be the talk of the town for all the wrong reasons

t’s important to thoroughly think through the implications of any public relations campaigns you are planning for your business. A good one can be amazingly beneficial to the bottom line, an ugly one can be a disaster that ruins the brand. Somewhere in between, a poorly executed campaign can make no impression whatsoever. Let’s look at an example of each type.

THE GOOD Greggs, the high street baker famed for their steak bakes, launched a vegan sausage roll in January 2019. This was a PR masterclass in several ways. Firstly, it was surprising. Veganism is associated with a hip metropolitan crowd and that isn’t how Greggs’ typical customer base is seen by most commentators. That makes it newsworthy. Secondly, Greggs restricted availability to selected stores, creating a sense of demand and excitement – a bit like getting your hands on the latest iPhone. And it was presented in a slightly tongue-in-cheek way. By embracing vegan products, it would have been all-too-easy to appear to be virtue-signaling, but the marketing team at Greggs avoided this pitfall by presenting the product as fun, rather than a political statement. It was so successful that the baker enjoyed a bumper year, sharing a £7m payment among staff and a £35m special dividend to shareholders.

THE BAD Aviva, best known for insurance, is “Leading the way on climate action” with a plan to become a net zero carbon emissions

THE UGLY For sheer brass neck, Brewdog takes some beating. The Scottish ‘punk’ brewery offering “craft beer for the people” ran a campaign that proves all that glitters is not gold. They offered drinkers a chance to win one of “Ten solid gold Punk IPA cans ... hidden in Punk 12-packs”. Brewdog claimed each can was “worth £15k” so they were effectively giving away £150,000 of prizes. That’s a big deal. When one of the lucky winners found a prize can in his pack of beer he was at first

company by 2040. While it’s good to see a large corporation taking an interest in the future of the planet, it’s difficult for most people to see the connection between an insurance provider and a major carbon footprint. It’s easy to understand the benefit of an airline, a haulage company or an energy provider slashing their emissions, but it’s hard to get excited about the financial services sector going green. As a result, the campaign fails to gain traction and falls flat.

The first rule of advertising is to get noticed, it’s equally important to be recognised for the right reasons

Expert adv ice to improve how you promote and sell you DAN SAGER FOUNDED THE FAB-BIKER PR AGENCY IN 1996 AND HAS r been advising businesses in the motorcycle industry on marketing products or matters ever since. In this series he looks at some of the best and worst PR services campaigns and the lessons we can learn from them. fab-biker.co.uk

delighted, but then disappointed to discover that, rather than being solid gold, it was in fact made of gold-plated brass. Another winner had his prize can valued by a jeweler, who thought it might be worth £500. This was widely reported across the media, including the BBC, and forced Brewdog’s communications team onto the defensive. For a brand that claims, “Authenticity is everything” (see “Brewdog believe” on their website) this is not a good look. Legendary showman PT Barnum said, “There’s no such thing as bad publicity” and, although it’s true that the first rule of advertising is to get noticed, it’s equally important to be recognised for the right reasons. There is no point spending time and money to create a negative impression of your business or, for that matter, to fail to make any impression at all. 

NEXT MONTH We take a look at marketing campaigns