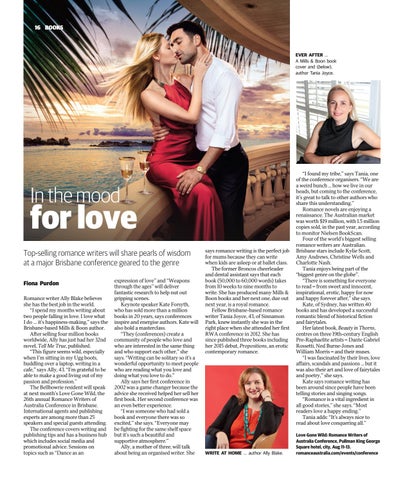 EVER AFTER ... A Mills & Boon book cover and (below), author Tania Joyce.

for love Top-selling romance writers will share pearls of wisdom at a major Brisbane conference geared to the genre Fiona Purdon Romance writer Ally Blake believes she has the best job in the world. “I spend my months writing about two people falling in love. I love what I do … it’s happiness-making,” says the Brisbane-based Mills & Boon author. After selling four million books worldwide, Ally has just had her 32nd novel, Tell Me True, published. “This figure seems wild, especially when I’m sitting in my Ugg boots, huddling over a laptop, writing in a cafe,’’ says Ally, 43. “I’m grateful to be able to make a good living out of my passion and profession.’’ The Bellbowrie resident will speak at next month’s Love Gone Wild, the 26th annual Romance Writers of Australia Conference in Brisbane. International agents and publishing experts are among more than 25 speakers and special guests attending. The conference covers writing and publishing tips and has a business hub which includes social media and promotional advice. Sessions on topics such as “Dance as an

expression of love’’ and “Weapons through the ages’’ will deliver fantastic research to help nut out gripping scenes. Keynote speaker Kate Forsyth, who has sold more than a million books in 20 years, says conferences inspire and energise authors. Kate will also hold a masterclass. “They (conferences) create a community of people who love and who are interested in the same thing and who support each other,” she says. “Writing can be solitary so it’s a wonderful opportunity to meet people who are reading what you love and doing what you love to do.” Ally says her first conference in 2002 was a game changer because the advice she received helped her sell her first book. Her second conference was an even better experience. “I was someone who had sold a book and everyone there was so excited,’’ she says. “Everyone may be fighting for the same shelf space but it’s such a beautiful and supportive atmosphere.’’ Ally, a mother of three, will talk about being an organised writer. She

says romance writing is the perfect job for mums because they can write when kids are asleep or at ballet class. The former Broncos cheerleader and dental assistant says that each book (50,000 to 60,000 words) takes from 10 weeks to nine months to write. She has produced many Mills & Boon books and her next one, due out next year, is a royal romance. Fellow Brisbane-based romance writer Tania Joyce, 43, of Sinnamon Park, knew instantly she was in the right place when she attended her first RWA conference in 2012. She has since published three books including her 2015 debut, Propositions, an erotic contemporary romance.

“I found my tribe,’’ says Tania, one of the conference organisers. “We are a weird bunch ... how we live in our heads, but coming to the conference, it’s great to talk to other authors who share this understanding.’’ Romance novels are enjoying a renaissance. The Australian market was worth $19 million, with 1.5 million copies sold, in the past year, according to monitor Nielsen BookScan. Four of the world’s biggest selling romance writers are Australian. Brisbane stars include Kylie Scott, Amy Andrews, Christine Wells and Charlotte Nash. Tania enjoys being part of the “biggest genre on the globe’’. “There is something for everyone to read – from sweet and innocent, inspirational, erotic, happy for now and happy forever after,’’ she says. Kate, of Sydney, has written 40 books and has developed a successful romantic blend of historical fiction and fairytales. Her latest book, Beauty in Thorns, centres on three 19th-century English Pre-Raphaelite artists – Dante Gabriel Rossetti, Ned Burne-Jones and William Morris – and their muses. “I was fascinated by their lives, love affairs, scandals and passions ... but it was also their art and love of fairytales and poetry,’’ she says. Kate says romance writing has been around since people have been telling stories and singing songs. “Romance is a vital ingredient in all good stories,’’ she says. “Most readers love a happy ending.’’ Tania adds: “It’s always nice to read about love conquering all.’’ Love Gone Wild: Romance Writers of Australia Conference, Pullman King George Square hotel, city, Aug 11-13. romanceaustralia.com/events/conference 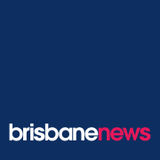