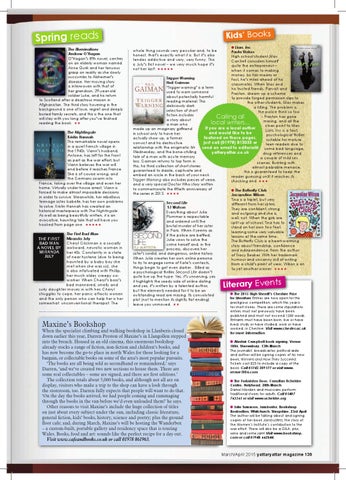 Spring reads The Illuminations Andrew O’Hagan O’Hagan’s fifth novel, centres on an elderly woman named Anne Quirk and her tenuous grasp on reality as she slowly succumbs to Alzheimer’s disease. Her moving story is interwoven with that of her grandson, 29-year-old soldier Luke, and his return to Scotland after a disastrous mission in Afghanistan. The third story hovering in the background is one of love, regret and deeply buried family secrets, and this is the one that will stay with you long after you’ve finished reading the book. H H The Nightingale Kristin Hannah This remarkable novel opens in a quiet French village in the 1940s. Viann’s husband, Antoine, has left for the Front as part as the war effort, but Viann believes the war will end before it reaches France. She is of course wrong, and the Germans swarm into France, taking over the village and even her home. Virtually under house arrest, Viann is forced to make almost impossible decisions in order to survive. Meanwhile, her rebellious teenage sister, Isabelle, has her own problems to solve. Kristin Hannah has created an historical masterpiece with The Nightingale. As well as being beautifully written, it is an evocative, haunting tale that will have you hooked from page one. H H H H H The First Bad Man Miranda July Cheryl Glickman is a socially awkward, neurotic woman in her 40s. Constantly in a state of near hysteria (due to being haunted by a baby boy she met when she was six), she is also infatuated with Phillip, her much older, creepy coworker. When Cheryl’s boss’s bad mannered, smelly and surly daughter moves in with her, Cheryl struggles to cope, her panic attacks worsen and the only person who can help her is her somewhat unconventional therapist. The

whole thing sounds very peculiar and, to be honest, that’s exactly what it is. But it’s also tender, addictive and very, very funny. This is July’s first novel – we very much hope it’s not her last! H H H H H

Paula Stokes High school student Max Cantrell considers himself quite the entrepreneur – when it comes to making money, by fair means or Trigger Warning foul, he’s miles ahead of his Neil Gaiman classmates. When Max and ‘Trigger warning’ is a term his trusted friends, Parvati and used to warn someone Preston, dream up a scheme about potentially harmful to provide forged permission slips to reading material. This the other students, Max makes deliciously dark a killing. The problem is, selection of short the police think so too fiction includes – Preston has gone Calling all a story about missing, and all the local writers... a man who clues point to Max. If you are a local author made up an imaginary girlfriend Liars, Inc is a taut, and would like to be in school only to have her psychological thriller featured on these pages, actually show up, a former suitable for mature just call (01978) 813035 or convict and his destructive teen readers due to relationship with the enigmatic Mr send an email to editorial@ some bad language, Wednesday, and the bone-chilling yattaryattar.co.uk drug references and tale of a man with acute memory a couple of mild sex loss. Gaiman returns to top form in scenes. Bursting with this, his third collection of short stories almost palpable menace, guaranteed to dazzle, captivate and this is guaranteed to keep the embed an icicle in the back of your neck. reader guessing until it reaches its Trigger Warning also includes pieces of verse, shocking end. H H H and a very special Doctor Who story written to commemorate the fiftieth anniversary of l The Butterfly Club the series in 2013. H H H H Jacqueline Wilson Second Life SJ Watson Everything about Julia Plummer is respectable and ordered until the brutal murder of her sister in Paris. When it seems as if the police are baffled, Julia vows to solve the crime herself and, in the process, discovers her sister’s sordid, and dangerous, online history. When Julia creates her own online persona to try to engage some of Kate’s contacts, things begin to get even darker... Billed as a psychological thriller, Second Life doesn’t quite live up the hype. Yes, it’s unnerving, yes it highlights the seedy side of online dating and yes, it’s written by a talented author, but the elements needed for it to be an outstanding read are missing. Its convoluted plot (not to mention its slightly flat ending) leave you unmoved. H H

When the specialist climbing and walking bookshop in Llanberis closed down earlier this year, Darren Preston of Maxine’s in Llangollen stepped into the breach. Housed in an old cinema, this enormous bookshop already stocks a range of fiction, non-fiction and children’s books, and has now become the go-to place in north Wales for those looking for a bargain, or collectable books on some of the area’s most popular pursuits. ‘The books are all being sold as secondhand or remaindered,’ says Darren, ‘and we’ve created two new sections to house them. There are some real collectables – some are signed, and there are first editions.’ The collection totals about 5,000 books, and although not all are on display, visitors who make a trip to the shop can have a look through the storeroom, too. Darren fully expects that people will want to do that. ‘On the day the books arrived, we had people coming and rummaging through the books in the van before we’d even unloaded them!’ he says. Other reasons to visit Maxine’s include the huge collection of titles on just about every subject under the sun, including classic literature, general fiction, kids’ books, history, science and poetry; plus the ground floor cafe; and, during March, Maxine’s will be hosting the Wanderbox – a custom-built, portable gallery and residency space that is touring Wales. Books, food and art: sounds like the perfect recipe for a day out. Visit www.cafeandbooks.co.uk or call 01978 861963.

Tina is a triplet, but very different from her sisters. They are confident, strong and outgoing and she is, well, not. When the girls are split up at school, Tina has to stand on her own two feet, learning some very valuable lessons at the same time. The Butterfly Club is a heart-warming story about friendship, confidence and independence, from the author of Tracy Beaker. With her trademark humour and uncanny skill of writing from a child’s point of view, Wilson is on to yet another winner. H H H H

Literary Events l The 2015 High Sherriff’s Cheshire Prize for Literature Entries are now open for this prestigious competition, which this year is for short stories. There are some stipulations: entries must not previously have been published and must not exceed 1500 words. Entrants must have been born, live or have lived, study or have studied, work or have worked, in Cheshire. Visit www.chester.ac.uk for more information. l Alastair Campbell book signing, Venue 1886, Shrewsbury, 13th March The journalist, broadcaster, political aide and author will be signing copies of his new book, Winners and How They Succeed. Tickets cost £25 to include a copy of the book. Call 01743 289177 or visit www. venue1886.com l The Forbidden Door, Canolfan Ucheldre Centre, Holyhead, 28th March Daniel Morden and musicians perform traditional stories for adults. Call 01407 763361 or visit www.ucheldre.org. l Julie Summers, Jambuster, Bookshrop Booksellers, Whitchurch, Shropshire, 23rd April The author will be talking about and signing copies of her book Jambusters, the story of the Women’s Institute’s contribution to the war effort. There will also be a Q&A, plus wine and some jam! Visit www.bookshrop. com or call 01948 662844.