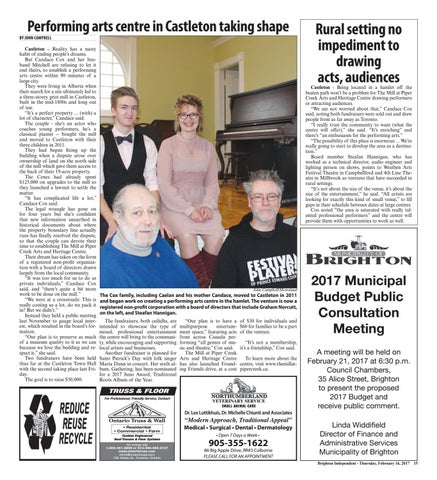 Castleton – Reality has a nasty habit of ending people’s dreams. But Candace Cox and her husband Mitchell are refusing to let it end theirs, to establish a performing arts centre within 90 minutes of a large city. They were living in Alberta when their search for a site ultimately led to a three-storey grist mill in Castleton, built in the mid-1800s and long out of use. “It’s a perfect property ... (with) a lot of character,” Candace said. The couple - she’s an actor who coaches young performers, he’s a classical pianist -- bought the mill and moved to Castleton with their three children in 2011. They had begun fixing up the building when a dispute arose over ownership of land on the north side of the mill which gave them access to the back of their 19-acre property. The Coxes had already spent $125,000 on upgrades to the mill so they launched a lawsuit to settle the matter. “It has complicated life a lot,” Candace Cox said. The legal wrangle has gone on for four years but she’s confident that new information unearthed in historical documents about where the property boundary line actually runs has finally resolved the dispute, so that the couple can devote their time to establishing The Mill at Piper Creek Arts and Heritage Centre. Their dream has taken on the form of a registered non-profit organization with a board of directors drawn largely from the local community. “It was too much for us to do as private individuals,” Candace Cox said, and “there’s quite a bit more work to be done on the mill.” “We were at a crossroads: This is really costing us a lot, do we pack it in? But we didn’t.” Instead they held a public meeting last November to gauge local interest, which resulted in the board’s formation. “Our plan is to preserve as much of a museum quality to it as we can because we love the building and respect it,” she said. Two fundraisers have been held thus far at the Castleton Town Hall with the second taking place last Friday. The goal is to raise $30,000.

Castleton - Being located in a hamlet off the beaten path won’t be a problem for The Mill at Piper Creek Arts and Heritage Centre drawing performers or attracting audiences. “We are not worried about that,” Candace Cox said, noting both fundraisers were sold out and drew people from as far away as Toronto. “I really trust the community to want (what the centre will offer),” she said. “It’s enriching” and there’s “an enthusiasm for the performing arts.” “The possibility of this place is enormous ... We’re really going to start to develop the area as a destination.” Board member Steafan Hannigan, who has worked as a technical director, audio engineer and lighting person on shows, points to Westben Arts Festival Theatre in Campbellford and 4th Line Theatre in Millbrook as ventures that have succeeded in rural settings. “It’s not about the size of the venue, it’s about the size of the entertainment,” he said. “All artists are looking for exactly this kind of small venue,” to fill gaps in their schedule between dates at large centres. Cox noted “the area is saturated with really talented professional performers” and the centre will provide them with opportunities to work as well.

The Cox family, including Caelan and his mother Candace, moved to Castleton in 2011 and began work on creating a performing arts centre in the hamlet. The venture is now a registered non-profit corporation with a board of directors that include Graham Norcutt, on the left, and Steafan Hannigan. The fundraisers, both ceilidhs, are intended to showcase the type of mixed, professional entertainment the centre will bring to the community, while encouraging and supporting local artists and businesses.   Another fundraiser is planned for Saint Patrick’s Day with folk singer Maria Dunn in concert. Her sixth album, Gathering, has been nominated for a 2017 Juno Award, Traditional Roots Album of the Year.

“Our plan is to have a multipurpose entertainment space,” featuring acts from across Canada performing “all genres of music and theatre,” Cox said. The Mill at Piper Creek Arts and Heritage Centre has also launched Founding Friends drive, at a cost

of $30 for individuals and $60 for families to be a part of the venture. “It’s not a membership, it’s a friendship,” Cox said. To learn more about the centre, visit www.themillatpipercreek.ca.