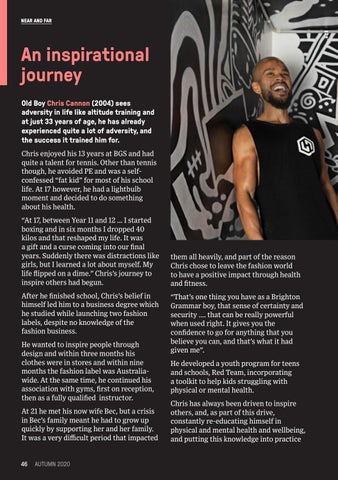 An inspirational journey Old Boy Chris Cannon (2004) sees adversity in life like altitude training and at just 33 years of age, he has already experienced quite a lot of adversity, and the success it trained him for. Chris enjoyed his 13 years at BGS and had quite a talent for tennis. Other than tennis though, he avoided PE and was a selfconfessed “fat kid” for most of his school life. At 17 however, he had a lightbulb moment and decided to do something about his health. “At 17, between Year 11 and 12 … I started boxing and in six months I dropped 40 kilos and that reshaped my life. It was a gift and a curse coming into our final years. Suddenly there was distractions like girls, but I learned a lot about myself. My life flipped on a dime.” Chris’s journey to inspire others had begun. After he finished school, Chris’s belief in himself led him to a business degree which he studied while launching two fashion labels, despite no knowledge of the fashion business. He wanted to inspire people through design and within three months his clothes were in stores and within nine months the fashion label was Australiawide. At the same time, he continued his association with gyms, first on reception, then as a fully qualified instructor. At 21 he met his now wife Bec, but a crisis in Bec’s family meant he had to grow up quickly by supporting her and her family. It was a very difficult period that impacted 46 AUTUMN 2020

them all heavily, and part of the reason Chris chose to leave the fashion world to have a positive impact through health and fitness. “That’s one thing you have as a Brighton Grammar boy, that sense of certainty and security …. that can be really powerful when used right. It gives you the confidence to go for anything that you believe you can, and that’s what it had given me”. He developed a youth program for teens and schools, Red Team, incorporating a toolkit to help kids struggling with physical or mental health. Chris has always been driven to inspire others, and, as part of this drive, constantly re-educating himself in physical and mental health and wellbeing, and putting this knowledge into practice 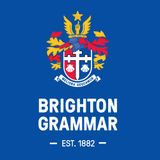