YOUR V.I.P. GUIDE TO LUXURY, LIFESTYLE AND LISTINGS 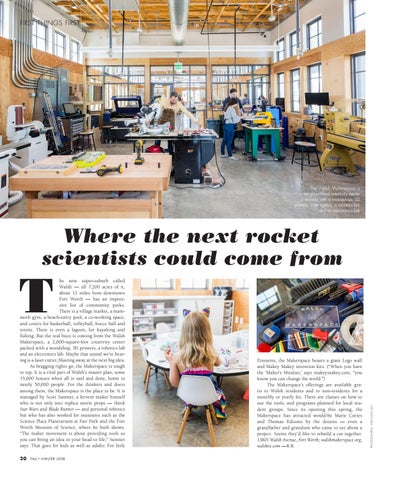 The Walsh Makerspace, a neighborhood creativity center brimming with a woodshop, 3D printers, laser cutters, a robotics lab and an electronics lab

Where the next rocket scientists could come from

Einsteins, the Makerspace boasts a giant Lego wall and Makey Makey invention kits. (“When you have the ‘Maker’s Mindset,’ says makeymakey.com, “you know you can change the world.”) The Makerspace’s offerings are available gratis to Walsh residents and to non-residents for a monthly or yearly fee. There are classes on how to use the tools, and programs planned for local student groups. Since its opening this spring, the Makerspace has attracted would-be Marie Curies and Thomas Edisons by the dozens — even a grandfather and grandson who came to see about a project. Seems they’d like to rebuild a car together. 13801 Walsh Avenue, Fort Worth; walshmakerspace.org; walshtx.com —R.B.

he new super-suburb called Walsh — all 7,200 acres of it, about 12 miles from downtown Fort Worth — has an impressive list of community perks. There is a village market, a mammoth gym, a beach-entry pool, a co-working space, and courts for basketball, volleyball, bocce ball and tennis. There is even a lagoon, for kayaking and fishing. But the real buzz is coming from the Walsh Makerspace, a 2,000-square-foot creativity center packed with a woodshop, 3D printers, a robotics lab and an electronics lab. Maybe that sound we’re hearing is a laser cutter, blasting away at the next big idea. As bragging rights go, the Makerspace is tough to top. It is a vital part of Walsh’s master plan, some 15,000 houses when all is said and done, home to nearly 50,000 people. For the thinkers and doers among them, the Makerspace is the place to be. It is managed by Scott Sumner, a fervent maker himself who is not only into replica movie props — think Star Wars and Blade Runner — and personal robotics but who has also worked for museums such as the Science Place Planetarium at Fair Park and the Fort Worth Museum of Science, where he built shows. “The maker movement is about providing tools so you can bring an idea in your head to life,” Sumner says. That goes for kids as well as adults: For little

YOUR V.I.P. GUIDE TO LUXURY, LIFESTYLE AND LISTINGS

This is B, the one-of-a-kind guide to luxury, style, houses, art, architecture and more, by Briggs Freeman Sotheby’s International Realty 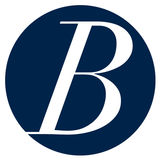