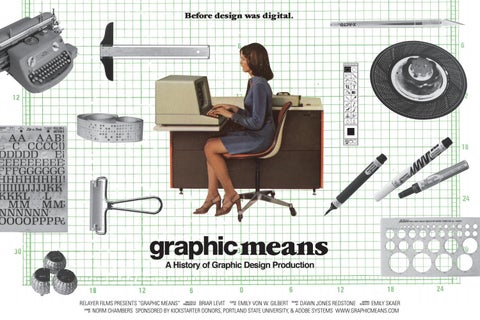 Before design was digital.

directorâ&#x20AC;&#x2122;s note I have amassed a vast collection of design production manuals (1960s, 70s, and 80s) from thrift shops over the years. As the stack grew, it became clear I was naturally drawn to this period of design, and the skills and processes that went along with it. This is perhaps, because I missed these production methods by about 12 years, and worked almost exclusively with a computer during my education and after. I had some vague knowledge about production before the Mac, but it was only based on brief references my teachers made, or the little-used-tools that remained in various studios I worked in. It occurred to me that if I knew so little, younger graphic designers know even less! So with this, I set out to document the tools, processes, and people, of this brief but critical and fascinating moment in the history of graphic design. Briar Levit, Director/Producer

synopsis Up until just over 30 years ago, when the desktop computer debuted, the whole design production process would have been done primarily by hand, and with the aide of analog machines. The design and print industries used a variety of ways to get type and image onto film, plates, and finally to the printed page. Graphic Means is a journey through this transformative Mad Men-era of pre-digital design production to the advent of the desktop computer. It explores the methods, tools, and evolving social roles that gave rise to the graphic design industry as we know it today.

crew The percentage of women in top positions in the film industry is still markedly low. In light of this, Iâ&#x20AC;&#x2122;ve deliberately chosen an all-woman crew for Graphic Means.

Briar Levit (Director + Producer), is an Assistant Professor of Graphic Design at Portland State University. She came up as a designer in the late 1990â&#x20AC;&#x2122;s in San Francisco, and missed the cold type era by just a matter of a few years. Dawn Jones Redstone (Director of Photography), is the principal of Hearts + Sparks Productions. Her work has appeared around the country in commercials, film festivals, the news and more.

Emily Skaer (Motion Designer), is a freelance motion designer and illustrator who works with a range of clients from educational to corporate.

partners Graphic Means is lucky to have Adobe Typekit as a sponsor. We are always looking for opportunities to partner with organizations and businesses.