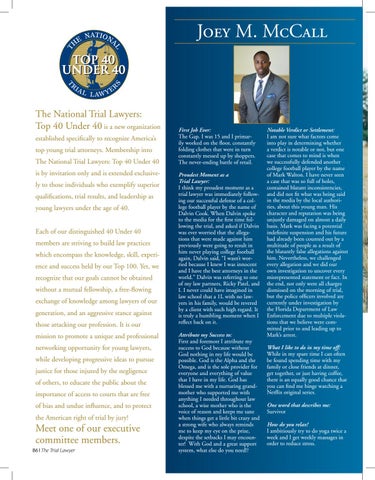 The National Trial Lawyers: Top 40 Under 40 is a new organization established specifically to recognize America’s top young trial attorneys. Membership into The National Trial Lawyers: Top 40 Under 40 is by invitation only and is extended exclusively to those individuals who exemplify superior qualifications, trial results, and leadership as young lawyers under the age of 40. Each of our distinguished 40 Under 40 members are striving to build law practices which encompass the knowledge, skill, experience and success held by our Top 100. Yet, we recognize that our goals cannot be obtained without a mutual fellowship, a free-flowing exchange of knowledge among lawyers of our generation, and an aggressive stance against those attacking our profession. It is our mission to promote a unique and professional networking opportunity for young lawyers, while developing progressive ideas to pursue justice for those injured by the negligence of others, to educate the public about the importance of access to courts that are free of bias and undue influence, and to protect the American right of trial by jury!

Meet one of our executive committee members. 86 x The Trial Lawyer

First Job Ever: The Gap. I was 15 and I primarily worked on the floor, constantly folding clothes that were in turn constantly messed up by shoppers. The never-ending battle of retail. Proudest Moment as a Trial Lawyer: I think my proudest moment as a trial lawyer was immediately following our successful defense of a college football player by the name of Dalvin Cook. When Dalvin spoke to the media for the first time following the trial, and asked if Dalvin was ever worried that the allegations that were made against him previously were going to result in him never playing college football again, Dalvin said, “I wasn’t worried because I knew I was innocent and I have the best attorneys in the world.” Dalvin was referring to one of my law partners, Ricky Patel, and I. I never could have imagined in law school that a 1L with no lawyers in his family, would be revered by a client with such high regard. It is truly a humbling moment when I reflect back on it. Attribute my Success to: First and foremost I attribute my success to God because without God nothing in my life would be possible. God is the Alpha and the Omega, and is the sole provider for everyone and everything of value that I have in my life. God has blessed me with a nurturing grandmother who supported me with anything I needed throughout law school, a wise mother who is the voice of reason and keeps me sane when things get a little bit crazy and a strong wife who always reminds me to keep my eye on the prize, despite the setbacks I may encounter! With God and a great support system, what else do you need!?

Notable Verdict or Settlement: I am not sure what factors come into play in determining whether a verdict is notable or not, but one case that comes to mind is when we successfully defended another college football player by the name of Mark Walton. I have never seen a case that was so full of holes, contained blatant inconsistencies, and did not fit what was being said in the media by the local authorities, about this young man. His character and reputation was being unjustly damaged on almost a daily basis. Mark was facing a potential indefinite suspension and his future had already been counted out by a multitude of people as a result of the blatantly false allegations against him. Nevertheless, we challenged every allegation and we did our own investigation to uncover every misrepresented statement or fact. In the end, not only were all charges dismissed on the morning of trial, but the police officers involved are currently under investigation by the Florida Department of Law Enforcement due to multiple violations that we believe were committed prior to and leading up to Mark’s arrest. What I like to do in my time off: While in my spare time I can often be found spending time with my family or close friends at dinner, get together, or just having coffee, there is an equally good chance that you can find me binge watching a Netflix original series. One word that describes me: Survivor How do you relax? I ambitiously try to do yoga twice a week and I get weekly massages in order to reduce stress.