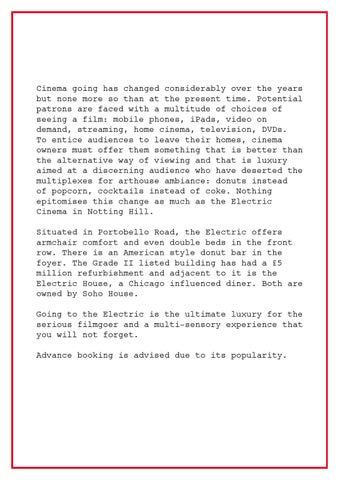 Cinema going has changed considerably over the years but none more so than at the present time. Potential patrons are faced with a multitude of choices of seeing a film: mobile phones, iPads, video on demand, streaming, home cinema, television, DVDs. To entice audiences to leave their homes, cinema owners must offer them something that is better than the alternative way of viewing and that is luxury aimed at a discerning audience who have deserted the multiplexes for arthouse ambiance: donuts instead of popcorn, cocktails instead of coke. Nothing epitomises this change as much as the Electric Cinema in Notting Hill. Situated in Portobello Road, the Electric offers armchair comfort and even double beds in the front row. There is an American style donut bar in the foyer. The Grade II listed building has had a ÂŁ5 million refurbishment and adjacent to it is the Electric House, a Chicago influenced diner. Both are owned by Soho House. Going to the Electric is the ultimate luxury for the serious filmgoer and a multi-sensory experience that you will not forget. Advance booking is advised due to its popularity.