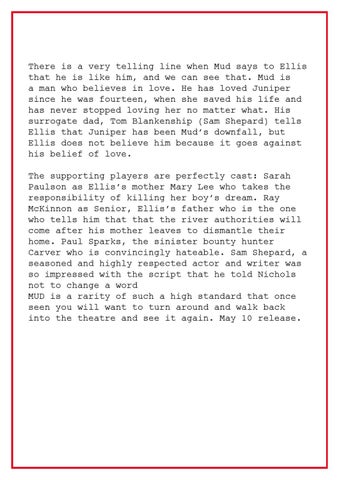 There is a very telling line when Mud says to Ellis that he is like him, and we can see that. Mud is a man who believes in love. He has loved Juniper since he was fourteen, when she saved his life and has never stopped loving her no matter what. His surrogate dad, Tom Blankenship (Sam Shepard) tells Ellis that Juniper has been Mud’s downfall, but Ellis does not believe him because it goes against his belief of love. The supporting players are perfectly cast: Sarah Paulson as Ellis’s mother Mary Lee who takes the responsibility of killing her boy’s dream. Ray McKinnon as Senior, Ellis’s father who is the one who tells him that that the river authorities will come after his mother leaves to dismantle their home. Paul Sparks, the sinister bounty hunter Carver who is convincingly hateable. Sam Shepard, a seasoned and highly respected actor and writer was so impressed with the script that he told Nichols not to change a word MUD is a rarity of such a high standard that once seen you will want to turn around and walk back into the theatre and see it again. May 10 release.