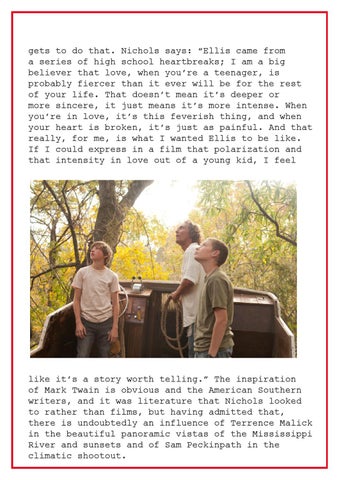 gets to do that. Nichols says: “Ellis came from a series of high school heartbreaks; I am a big believer that love, when you’re a teenager, is probably fiercer than it ever will be for the rest of your life. That doesn’t mean it’s deeper or more sincere, it just means it’s more intense. When you’re in love, it’s this feverish thing, and when your heart is broken, it’s just as painful. And that really, for me, is what I wanted Ellis to be like. If I could express in a film that polarization and that intensity in love out of a young kid, I feel

like it’s a story worth telling.” The inspiration of Mark Twain is obvious and the American Southern writers, and it was literature that Nichols looked to rather than films, but having admitted that, there is undoubtedly an influence of Terrence Malick in the beautiful panoramic vistas of the Mississippi River and sunsets and of Sam Peckinpath in the climatic shootout.