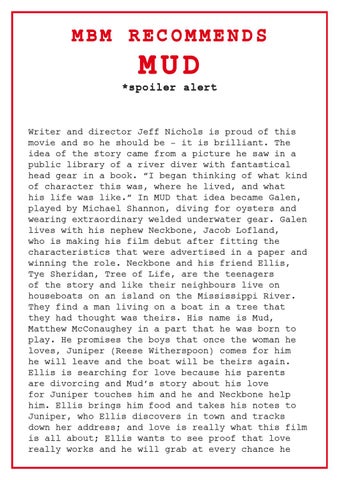 Writer and director Jeff Nichols is proud of this movie and so he should be – it is brilliant. The idea of the story came from a picture he saw in a public library of a river diver with fantastical head gear in a book. “I began thinking of what kind of character this was, where he lived, and what his life was like.” In MUD that idea became Galen, played by Michael Shannon, diving for oysters and wearing extraordinary welded underwater gear. Galen lives with his nephew Neckbone, Jacob Lofland, who is making his film debut after fitting the characteristics that were advertised in a paper and winning the role. Neckbone and his friend Ellis, Tye Sheridan, Tree of Life, are the teenagers of the story and like their neighbours live on houseboats on an island on the Mississippi River. They find a man living on a boat in a tree that they had thought was theirs. His name is Mud, Matthew McConaughey in a part that he was born to play. He promises the boys that once the woman he loves, Juniper (Reese Witherspoon) comes for him he will leave and the boat will be theirs again. Ellis is searching for love because his parents are divorcing and Mud’s story about his love for Juniper touches him and he and Neckbone help him. Ellis brings him food and takes his notes to Juniper, who Ellis discovers in town and tracks down her address; and love is really what this film is all about; Ellis wants to see proof that love really works and he will grab at every chance he