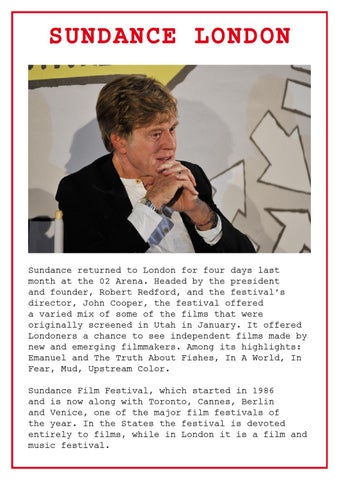 Sundance returned to London for four days last month at the 02 Arena. Headed by the president and founder, Robert Redford, and the festivalâ&#x20AC;&#x2122;s director, John Cooper, the festival offered a varied mix of some of the films that were originally screened in Utah in January. It offered Londoners a chance to see independent films made by new and emerging filmmakers. Among its highlights: Emanuel and The Truth About Fishes, In A World, In Fear, Mud, Upstream Color. Sundance Film Festival, which started in 1986 and is now along with Toronto, Cannes, Berlin and Venice, one of the major film festivals of the year. In the States the festival is devoted entirely to films, while in London it is a film and music festival.