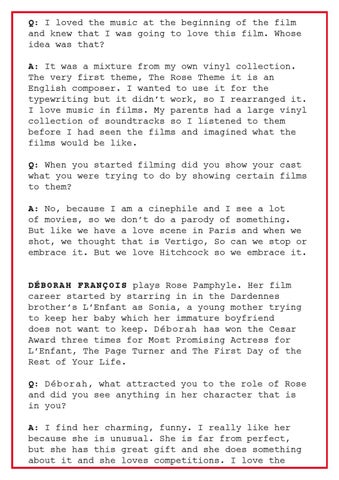 Q: I loved the music at the beginning of the film and knew that I was going to love this film. Whose idea was that? A: It was a mixture from my own vinyl collection. The very first theme, The Rose Theme it is an English composer. I wanted to use it for the typewriting but it didn’t work, so I rearranged it. I love music in films. My parents had a large vinyl collection of soundtracks so I listened to them before I had seen the films and imagined what the films would be like. Q: When you started filming did you show your cast what you were trying to do by showing certain films to them? A: No, because I am a cinephile and I see a lot of movies, so we don’t do a parody of something. But like we have a love scene in Paris and when we shot, we thought that is Vertigo, So can we stop or embrace it. But we love Hitchcock so we embrace it. Déborah François plays Rose Pamphyle. Her film career started by starring in in the Dardennes brother’s L’Enfant as Sonia, a young mother trying to keep her baby which her immature boyfriend does not want to keep. Déborah has won the Cesar Award three times for Most Promising Actress for L’Enfant, The Page Turner and The First Day of the Rest of Your Life. Q: Déborah, what attracted you to the role of Rose and did you see anything in her character that is in you? A: I find her charming, funny. I really like her because she is unusual. She is far from perfect, but she has this great gift and she does something about it and she loves competitions. I love the