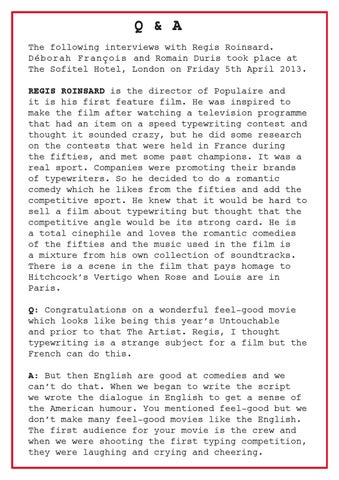 Q & A The following interviews with Regis Roinsard. Déborah François and Romain Duris took place at The Sofitel Hotel, London on Friday 5th April 2013. REGIS ROINSARD is the director of Populaire and it is his first feature film. He was inspired to make the film after watching a television programme that had an item on a speed typewriting contest and thought it sounded crazy, but he did some research on the contests that were held in France during the fifties, and met some past champions. It was a real sport. Companies were promoting their brands of typewriters. So he decided to do a romantic comedy which he likes from the fifties and add the competitive sport. He knew that it would be hard to sell a film about typewriting but thought that the competitive angle would be its strong card. He is a total cinephile and loves the romantic comedies of the fifties and the music used in the film is a mixture from his own collection of soundtracks. There is a scene in the film that pays homage to Hitchcock’s Vertigo when Rose and Louis are in Paris. Q: Congratulations on a wonderful feel-good movie which looks like being this year’s Untouchable and prior to that The Artist. Regis, I thought typewriting is a strange subject for a film but the French can do this. A: But then English are good at comedies and we can’t do that. When we began to write the script we wrote the dialogue in English to get a sense of the American humour. You mentioned feel-good but we don’t make many feel-good movies like the English. The first audience for your movie is the crew and when we were shooting the first typing competition, they were laughing and crying and cheering.