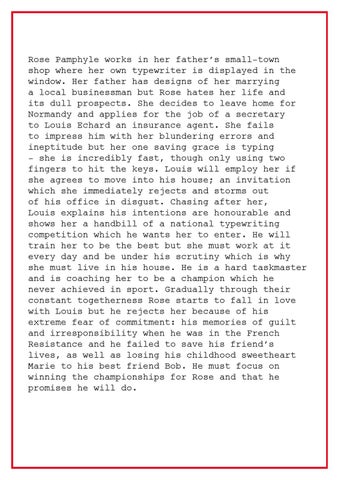 Rose Pamphyle works in her fatherâ&#x20AC;&#x2122;s small-town shop where her own typewriter is displayed in the window. Her father has designs of her marrying a local businessman but Rose hates her life and its dull prospects. She decides to leave home for Normandy and applies for the job of a secretary to Louis Echard an insurance agent. She fails to impress him with her blundering errors and ineptitude but her one saving grace is typing â&#x20AC;&#x201C; she is incredibly fast, though only using two fingers to hit the keys. Louis will employ her if she agrees to move into his house; an invitation which she immediately rejects and storms out of his office in disgust. Chasing after her, Louis explains his intentions are honourable and shows her a handbill of a national typewriting competition which he wants her to enter. He will train her to be the best but she must work at it every day and be under his scrutiny which is why she must live in his house. He is a hard taskmaster and is coaching her to be a champion which he never achieved in sport. Gradually through their constant togetherness Rose starts to fall in love with Louis but he rejects her because of his extreme fear of commitment: his memories of guilt and irresponsibility when he was in the French Resistance and he failed to save his friendâ&#x20AC;&#x2122;s lives, as well as losing his childhood sweetheart Marie to his best friend Bob. He must focus on winning the championships for Rose and that he promises he will do.