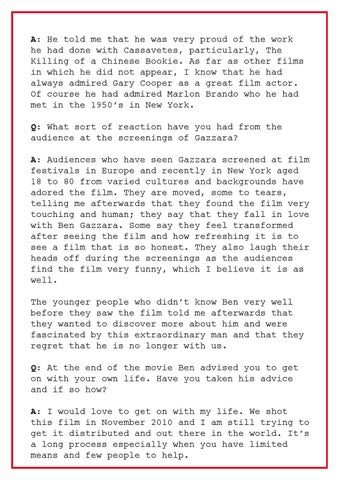 A: He told me that he was very proud of the work he had done with Cassavetes, particularly, The Killing of a Chinese Bookie. As far as other films in which he did not appear, I know that he had always admired Gary Cooper as a great film actor. Of course he had admired Marlon Brando who he had met in the 1950â&#x20AC;&#x2122;s in New York. Q: What sort of reaction have you had from the audience at the screenings of Gazzara? A: Audiences who have seen Gazzara screened at film festivals in Europe and recently in New York aged 18 to 80 from varied cultures and backgrounds have adored the film. They are moved, some to tears, telling me afterwards that they found the film very touching and human; they say that they fall in love with Ben Gazzara. Some say they feel transformed after seeing the film and how refreshing it is to see a film that is so honest. They also laugh their heads off during the screenings as the audiences find the film very funny, which I believe it is as well. The younger people who didnâ&#x20AC;&#x2122;t know Ben very well before they saw the film told me afterwards that they wanted to discover more about him and were fascinated by this extraordinary man and that they regret that he is no longer with us. Q: At the end of the movie Ben advised you to get on with your own life. Have you taken his advice and if so how? A: I would love to get on with my life. We shot this film in November 2010 and I am still trying to get it distributed and out there in the world. Itâ&#x20AC;&#x2122;s a long process especially when you have limited means and few people to help.