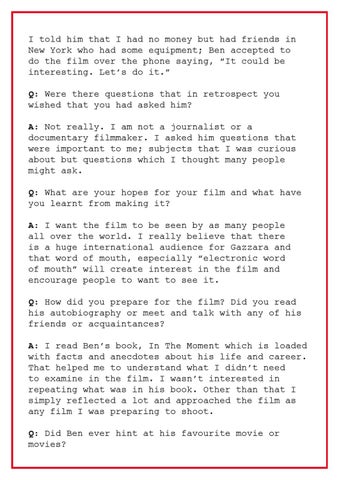 I told him that I had no money but had friends in New York who had some equipment; Ben accepted to do the film over the phone saying, “It could be interesting. Let’s do it.” Q: Were there questions that in retrospect you wished that you had asked him? A: Not really. I am not a journalist or a documentary filmmaker. I asked him questions that were important to me; subjects that I was curious about but questions which I thought many people might ask. Q: What are your hopes for your film and what have you learnt from making it? A: I want the film to be seen by as many people all over the world. I really believe that there is a huge international audience for Gazzara and that word of mouth, especially “electronic word of mouth” will create interest in the film and encourage people to want to see it. Q: How did you prepare for the film? Did you read his autobiography or meet and talk with any of his friends or acquaintances? A: I read Ben’s book, In The Moment which is loaded with facts and anecdotes about his life and career. That helped me to understand what I didn’t need to examine in the film. I wasn’t interested in repeating what was in his book. Other than that I simply reflected a lot and approached the film as any film I was preparing to shoot. Q: Did Ben ever hint at his favourite movie or movies?