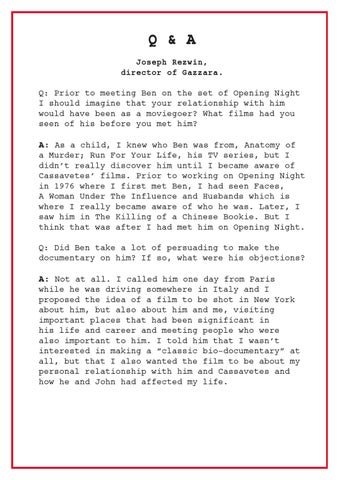 Q & A Joseph Rezwin, director of Gazzara. Q: Prior to meeting Ben on the set of Opening Night I should imagine that your relationship with him would have been as a moviegoer? What films had you seen of his before you met him?

A: As a child, I knew who Ben was from, Anatomy of

a Murder; Run For Your Life, his TV series, but I didn’t really discover him until I became aware of Cassavetes’ films. Prior to working on Opening Night in 1976 where I first met Ben, I had seen Faces, A Woman Under The Influence and Husbands which is where I really became aware of who he was. Later, I saw him in The Killing of a Chinese Bookie. But I think that was after I had met him on Opening Night. Q: Did Ben take a lot of persuading to make the documentary on him? If so, what were his objections?

A: Not at all. I called him one day from Paris

while he was driving somewhere in Italy and I proposed the idea of a film to be shot in New York about him, but also about him and me, visiting important places that had been significant in his life and career and meeting people who were also important to him. I told him that I wasn’t interested in making a “classic bio-documentary” at all, but that I also wanted the film to be about my personal relationship with him and Cassavetes and how he and John had affected my life.