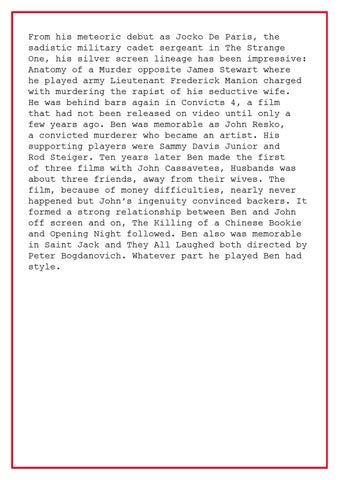 From his meteoric debut as Jocko De Paris, the sadistic military cadet sergeant in The Strange One, his silver screen lineage has been impressive: Anatomy of a Murder opposite James Stewart where he played army Lieutenant Frederick Manion charged with murdering the rapist of his seductive wife. He was behind bars again in Convicts 4, a film that had not been released on video until only a few years ago. Ben was memorable as John Resko, a convicted murderer who became an artist. His supporting players were Sammy Davis Junior and Rod Steiger. Ten years later Ben made the first of three films with John Cassavetes, Husbands was about three friends, away from their wives. The film, because of money difficulties, nearly never happened but Johnâ&#x20AC;&#x2122;s ingenuity convinced backers. It formed a strong relationship between Ben and John off screen and on, The Killing of a Chinese Bookie and Opening Night followed. Ben also was memorable in Saint Jack and They All Laughed both directed by Peter Bogdanovich. Whatever part he played Ben had style.