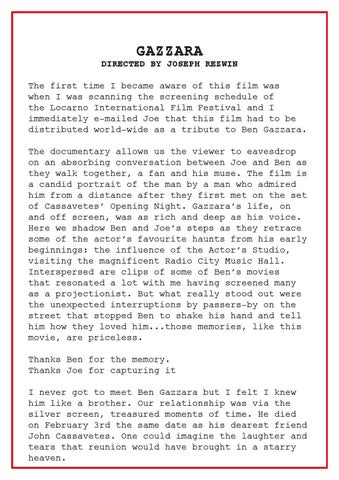 DIRECTED BY JOSEPH REZWIN The first time I became aware of this film was when I was scanning the screening schedule of the Locarno International Film Festival and I immediately e-mailed Joe that this film had to be distributed world-wide as a tribute to Ben Gazzara. The documentary allows us the viewer to eavesdrop on an absorbing conversation between Joe and Ben as they walk together, a fan and his muse. The film is a candid portrait of the man by a man who admired him from a distance after they first met on the set of Cassavetes’ Opening Night. Gazzara’s life, on and off screen, was as rich and deep as his voice. Here we shadow Ben and Joe’s steps as they retrace some of the actor’s favourite haunts from his early beginnings: the influence of the Actor’s Studio, visiting the magnificent Radio City Music Hall. Interspersed are clips of some of Ben’s movies that resonated a lot with me having screened many as a projectionist. But what really stood out were the unexpected interruptions by passers-by on the street that stopped Ben to shake his hand and tell him how they loved him...those memories, like this movie, are priceless. Thanks Ben for the memory. Thanks Joe for capturing it I never got to meet Ben Gazzara but I felt I knew him like a brother. Our relationship was via the silver screen, treasured moments of time. He died on February 3rd the same date as his dearest friend John Cassavetes. One could imagine the laughter and tears that reunion would have brought in a starry heaven.