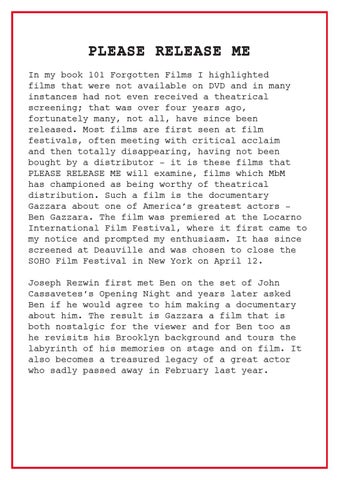 PLEASE RELEASE ME In my book 101 Forgotten Films I highlighted films that were not available on DVD and in many instances had not even received a theatrical screening; that was over four years ago, fortunately many, not all, have since been released. Most films are first seen at film festivals, often meeting with critical acclaim and then totally disappearing, having not been bought by a distributor – it is these films that PLEASE RELEASE ME will examine, films which MbM has championed as being worthy of theatrical distribution. Such a film is the documentary Gazzara about one of America’s greatest actors – Ben Gazzara. The film was premiered at the Locarno International Film Festival, where it first came to my notice and prompted my enthusiasm. It has since screened at Deauville and was chosen to close the SOHO Film Festival in New York on April 12. Joseph Rezwin first met Ben on the set of John Cassavetes’s Opening Night and years later asked Ben if he would agree to him making a documentary about him. The result is Gazzara a film that is both nostalgic for the viewer and for Ben too as he revisits his Brooklyn background and tours the labyrinth of his memories on stage and on film. It also becomes a treasured legacy of a great actor who sadly passed away in February last year.