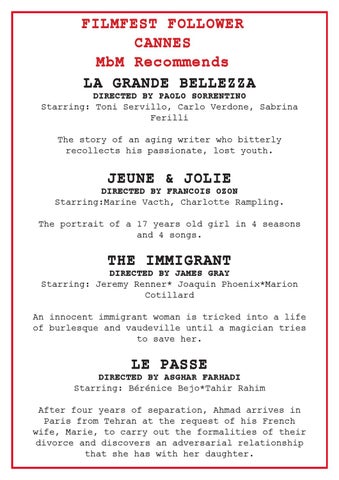 DIRECTED BY FRANCOIS OZON Starring:Marine Vacth, Charlotte Rampling. The portrait of a 17 years old girl in 4 seasons and 4 songs.

DIRECTED BY JAMES GRAY Starring: Jeremy Renner* Joaquin Phoenix*Marion Cotillard An innocent immigrant woman is tricked into a life of burlesque and vaudeville until a magician tries to save her.

DIRECTED BY ASGHAR FARHADI Starring: Bérénice Bejo*Tahir Rahim After four years of separation, Ahmad arrives in Paris from Tehran at the request of his French wife, Marie, to carry out the formalities of their divorce and discovers an adversarial relationship that she has with her daughter.