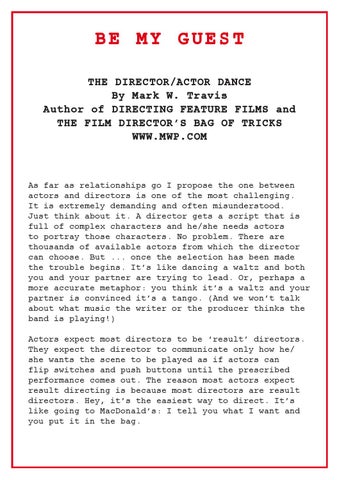 BE MY GUEST THE DIRECTOR/ACTOR DANCE By Mark W. Travis Author of DIRECTING FEATURE FILMS and THE FILM DIRECTOR’S BAG OF TRICKS WWW.MWP.COM

As far as relationships go I propose the one between actors and directors is one of the most challenging. It is extremely demanding and often misunderstood. Just think about it. A director gets a script that is full of complex characters and he/she needs actors to portray those characters. No problem. There are thousands of available actors from which the director can choose. But ... once the selection has been made the trouble begins. It’s like dancing a waltz and both you and your partner are trying to lead. Or, perhaps a more accurate metaphor: you think it’s a waltz and your partner is convinced it’s a tango. (And we won’t talk about what music the writer or the producer thinks the band is playing!) Actors expect most directors to be ‘result’ directors. They expect the director to communicate only how he/ she wants the scene to be played as if actors can flip switches and push buttons until the prescribed performance comes out. The reason most actors expect result directing is because most directors are result directors. Hey, it’s the easiest way to direct. It’s like going to MacDonald’s: I tell you what I want and you put it in the bag.