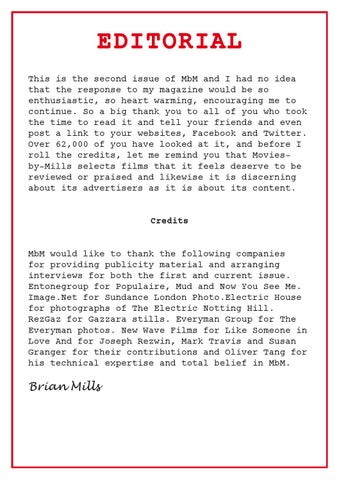 EDITORIAL This is the second issue of MbM and I had no idea that the response to my magazine would be so enthusiastic, so heart warming, encouraging me to continue. So a big thank you to all of you who took the time to read it and tell your friends and even post a link to your websites, Facebook and Twitter. Over 62,000 of you have looked at it, and before I roll the credits, let me remind you that Moviesby-Mills selects films that it feels deserve to be reviewed or praised and likewise it is discerning about its advertisers as it is about its content. Credits MbM would like to thank the following companies for providing publicity material and arranging interviews for both the first and current issue. Entonegroup for Populaire, Mud and Now You See Me. Image.Net for Sundance London Photo.Electric House for photographs of The Electric Notting Hill. RezGaz for Gazzara stills. Everyman Group for The Everyman photos. New Wave Films for Like Someone in Love And for Joseph Rezwin, Mark Travis and Susan Granger for their contributions and Oliver Tang for his technical expertise and total belief in MbM.