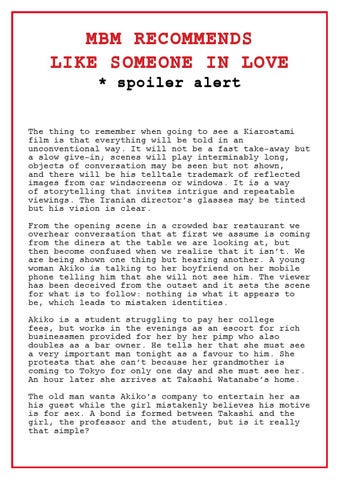 The thing to remember when going to see a Kiarostami film is that everything will be told in an unconventional way. It will not be a fast take-away but a slow give-in; scenes will play interminably long, objects of conversation may be seen but not shown, and there will be his telltale trademark of reflected images from car windscreens or windows. It is a way of storytelling that invites intrigue and repeatable viewings. The Iranian director’s glasses may be tinted but his vision is clear. From the opening scene in a crowded bar restaurant we overhear conversation that at first we assume is coming from the diners at the table we are looking at, but then become confused when we realize that it isn’t. We are being shown one thing but hearing another. A young woman Akiko is talking to her boyfriend on her mobile phone telling him that she will not see him. The viewer has been deceived from the outset and it sets the scene for what is to follow: nothing is what it appears to be, which leads to mistaken identities. Akiko is a student struggling to pay her college fees, but works in the evenings as an escort for rich businessmen provided for her by her pimp who also doubles as a bar owner. He tells her that she must see a very important man tonight as a favour to him. She protests that she can’t because her grandmother is coming to Tokyo for only one day and she must see her. An hour later she arrives at Takashi Watanabe’s home. The old man wants Akiko’s company to entertain her as his guest while the girl mistakenly believes his motive is for sex. A bond is formed between Takashi and the girl, the professor and the student, but is it really that simple?