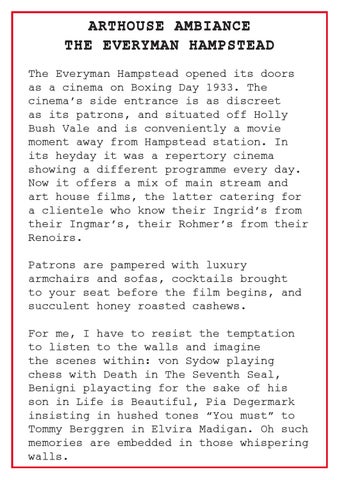 ARTHOUSE AMBIANCE THE EVERYMAN HAMPSTEAD The Everyman Hampstead opened its doors as a cinema on Boxing Day 1933. The cinema’s side entrance is as discreet as its patrons, and situated off Holly Bush Vale and is conveniently a movie moment away from Hampstead station. In its heyday it was a repertory cinema showing a different programme every day. Now it offers a mix of main stream and art house films, the latter catering for a clientele who know their Ingrid’s from their Ingmar’s, their Rohmer’s from their Renoirs. Patrons are pampered with luxury armchairs and sofas, cocktails brought to your seat before the film begins, and succulent honey roasted cashews. For me, I have to resist the temptation to listen to the walls and imagine the scenes within: von Sydow playing chess with Death in The Seventh Seal, Benigni playacting for the sake of his son in Life is Beautiful, Pia Degermark insisting in hushed tones “You must” to Tommy Berggren in Elvira Madigan. Oh such memories are embedded in those whispering walls.