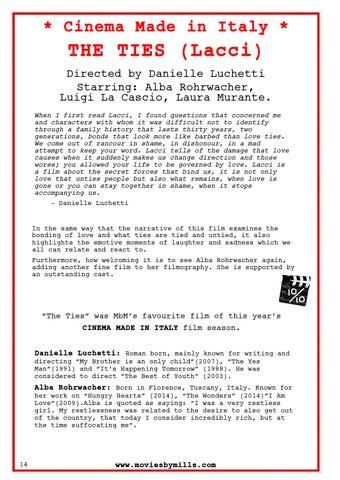 * Cinema Made in Italy *

THE TIES (Lacci) Directed by Danielle Luchetti Starring: Alba Rohrwacher, Luigi La Cascio, Laura Murante. When I first read Lacci, I found questions that concerned me and characters with whom it was difficult not to identify through a family history that lasts thirty years, two generations, bonds that look more like barbed than love ties. We come out of rancour in shame, in dishonour, in a mad attempt to keep your word. Lacci tells of the damage that love causes when it suddenly makes us change direction and those worse; you allowed your life to be governed by love. Lacci is a film about the secret forces that bind us, it is not only love that unties people but also what remains, when love is gone or you can stay together in shame, when it stops accompanying us. - Danielle Luchetti

In the same way that the narrative of this film examines the bonding of love and what ties are tied and untied, it also highlights the emotive moments of laughter and sadness which we all can relate and react to. Furthermore, how welcoming it is to see Alba Rohrwacher again, adding another fine film to her filmography. She is supported by an outstanding cast.

“The Ties” was MbM’s favourite film of this year’s CINEMA MADE IN ITALY film season. Danielle Luchetti: Roman born, mainly known for writing and directing “My Brother is an only child”(2007), “The Yes Man”(1991) and “It’s Happening Tomorrow” (1988). He was considered to direct “The Best of Youth” (2003).

Alba Rohrwacher: Born in Florence, Tuscany, Italy. Known for her work on “Hungry Hearts” (2014), “The Wonders” (2014)”I Am Love”(2009).Alba is quoted as saying: “I was a very restless girl. My restlessness was related to the desire to also get out of the country, that today I consider incredibly rich, but at the time suffocating me”.