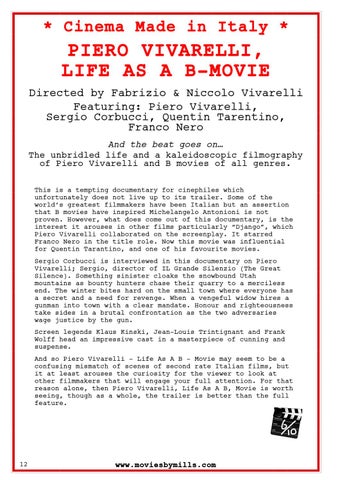 * Cinema Made in Italy *

PIERO VIVARELLI, LIFE AS A B-MOVIE Directed by Fabrizio & Niccolo Vivarelli Featuring: Piero Vivarelli, Sergio Corbucci, Quentin Tarentino, Franco Nero And the beat goes on… The unbridled life and a kaleidoscopic filmography of Piero Vivarelli and B movies of all genres. This is a tempting documentary for cinephiles which unfortunately does not live up to its trailer. Some of the world’s greatest filmmakers have been Italian but an assertion that B movies have inspired Michelangelo Antonioni is not proven. However, what does come out of this documentary, is the interest it arouses in other films particularly “Django”, which Piero Vivarelli collaborated on the screenplay. It starred Franco Nero in the title role. Now this movie was influential for Quentin Tarantino, and one of his favourite movies. Sergio Corbucci is interviewed in this documentary on Piero Vivarelli; Sergio, director of IL Grande Silenzio (The Great Silence). Something sinister cloaks the snowbound Utah mountains as bounty hunters chase their quarry to a merciless end. The winter bites hard on the small town where everyone has a secret and a need for revenge. When a vengeful widow hires a gunman into town with a clear mandate. Honour and righteousness take sides in a brutal confrontation as the two adversaries wage justice by the gun. Screen legends Klaus Kinski, Jean-Louis Trintignant and Frank Wolff head an impressive cast in a masterpiece of cunning and suspense. And so Piero Vivarelli – Life As A B – Movie may seem to be a confusing mismatch of scenes of second rate Italian films, but it at least arouses the curiosity for the viewer to look at other filmmakers that will engage your full attention. For that reason alone, then Piero Vivarelli, Life As A B, Movie is worth seeing, though as a whole, the trailer is better than the full feature.