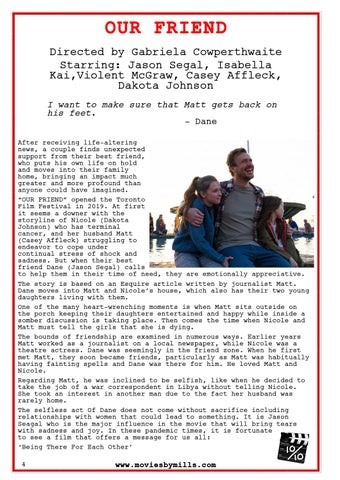 OUR FRIEND Directed by Gabriela Cowperthwaite Starring: Jason Segal, Isabella Kai,Violent McGraw, Casey Affleck, Dakota Johnson I want to make sure that Matt gets back on his feet. - Dane After receiving life-altering news, a couple finds unexpected support from their best friend, who puts his own life on hold and moves into their family home, bringing an impact much greater and more profound than anyone could have imagined. “OUR FRIEND” opened the Toronto Film Festival in 2019. At first it seems a downer with the storyline of Nicole (Dakota Johnson) who has terminal cancer, and her husband Matt (Casey Affleck) struggling to endeavor to cope under continual stress of shock and sadness. But when their best friend Dane (Jason Segal) calls to help them in their time of need, they are emotionally appreciative. The story is based on an Esquire article written by journalist Matt. Dane moves into Matt and Nicole’s house, which also has their two young daughters living with them. One of the many heart-wrenching moments is when Matt sits outside on the porch keeping their daughters entertained and happy while inside a somber discussion is taking place. Then comes the time when Nicole and Matt must tell the girls that she is dying. The bounds of friendship are examined in numerous ways. Earlier years Matt worked as a journalist on a local newspaper, while Nicole was a theatre actress. Dane was seemingly in the friend zone. When he first met Matt, they soon became friends, particularly as Matt was habitually having fainting spells and Dane was there for him. He loved Matt and Nicole. Regarding Matt, he was inclined to be selfish, like when he decided to take the job of a war correspondent in Libya without telling Nicole. She took an interest in another man due to the fact her husband was rarely home. The selfless act Of Dane does not come without sacrifice including relationships with women that could lead to something. It is Jason Seagal who is the major influence in the movie that will bring tears with sadness and joy. In these pandemic times, it is fortunate to see a film that offers a message for us all: ‘Being There For Each Other’ 4

A Magazine for Discerning Cinemagoers and Filmmakers. In This Issue: Reviews: Our Friend, Preparations To Be Together For An Unknown Period...

A Magazine for Discerning Cinemagoers and Filmmakers. In This Issue: Reviews: Our Friend, Preparations To Be Together For An Unknown Period...