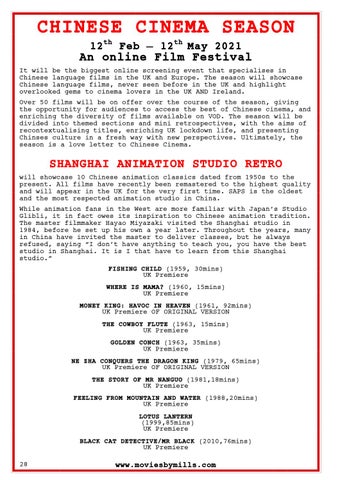 An online Film Festival It will be the biggest online screening event that specialises in Chinese language films in the UK and Europe. The season will showcase Chinese language films, never seen before in the UK and highlight overlooked gems to cinema lovers in the UK AND Ireland. Over 50 films will be on offer over the course of the season, giving the opportunity for audiences to access the best of Chinese cinema, and enriching the diversity of films available on VOD. The season will be divided into themed sections and mini retrospectives, with the aims of recontextualising titles, enriching UK lockdown life, and presenting Chinses culture in a fresh way with new perspectives. Ultimately, the season is a love letter to Chinese Cinema.

SHANGHAI ANIMATION STUDIO RETRO will showcase 10 Chinese animation classics dated from 1950s to the present. All films have recently been remastered to the highest quality and will appear in the UK for the very first time. SAPS is the oldest and the most respected animation studio in China. While animation fans in the West are more familiar with Japan’s Studio Glibli, it in fact owes its inspiration to Chinese animation tradition. The master filmmaker Hayao Miyazaki visited the Shanghai studio in 1984, before he set up his own a year later. Throughout the years, many in China have invited the master to deliver classes, but he always refused, saying “I don’t have anything to teach you, you have the best studio in Shanghai. It is I that have to learn from this Shanghai studio.” FISHING CHILD (1959, 30mins) UK Premiere WHERE IS MAMA? (1960, 15mins) UK Premiere MONEY KING: HAVOC IN HEAVEN (1961, 92mins) UK Premiere OF ORIGINAL VERSION THE COWBOY FLUTE (1963, 15mins) UK Premiere