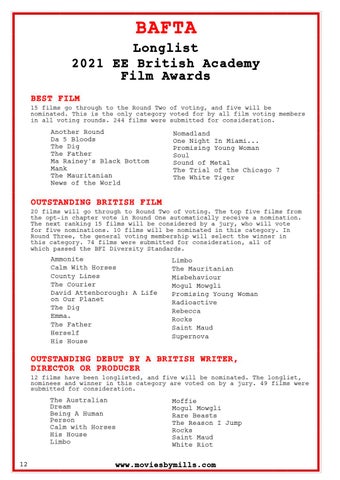 BAFTA Longlist 2021 EE British Academy Film Awards BEST FILM 15 films go through to the Round Two of voting, and five will be nominated. This is the only category voted for by all film voting members in all voting rounds. 244 films were submitted for consideration.

Another Round Da 5 Bloods The Dig The Father Ma Rainey&#39;s Black Bottom Mank The Mauritanian News of the World

Nomadland One Night In Miami... Promising Young Woman Soul Sound of Metal The Trial of the Chicago 7 The White Tiger

OUTSTANDING BRITISH FILM 20 films will go through to Round Two of voting. The top five films from the opt-in chapter vote in Round One automatically receive a nomination. The next ranking 15 films will be considered by a jury, who will vote for five nominations. 10 films will be nominated in this category. In Round Three, the general voting membership will select the winner in this category. 74 films were submitted for consideration, all of which passed the BFI Diversity Standards.

Ammonite Calm With Horses County Lines The Courier David Attenborough: A Life on Our Planet The Dig Emma. The Father Herself His House

OUTSTANDING DEBUT BY A BRITISH WRITER, DIRECTOR OR PRODUCER 12 films have been longlisted, and five will be nominated. The longlist, nominees and winner in this category are voted on by a jury. 49 films were submitted for consideration.