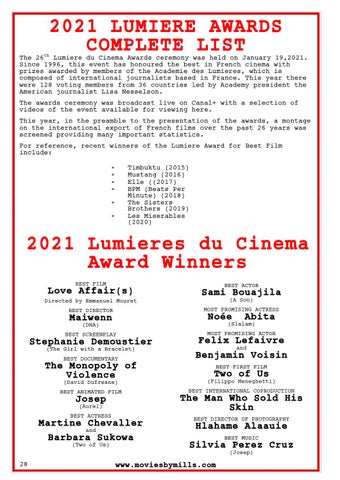 The 26th Lumiere du Cinema Awards ceremony was held on January 19,2021. Since 1996, this event has honoured the best in French cinema with prizes awarded by members of the Academie des Lumieres, which is composed of international journalists based in France. This year there were 128 voting members from 36 countries led by Academy president the American journalist Lisa Nesselson. The awards ceremony was broadcast live on Canal+ with a selection of videos of the event available for viewing here. This year, in the preamble to the presentation of the awards, a montage on the international export of French films over the past 26 years was screened providing many important statistics. For reference, recent winners of the Lumiere Award for Best Film include:    

Stephanie Demoustier (The Girl with a Bracelet) BEST DOCUMENTARY

Martine Chevaller and Barbara Sukowa (Two of Us)

The Man Who Sold His Skin BEST DIRECTOR OF PHOTOGRAPHY