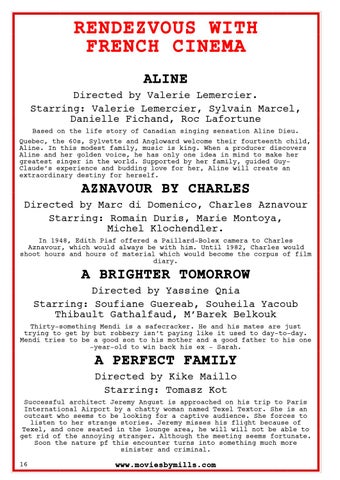 RENDEZVOUS WITH FRENCH CINEMA ALINE Directed by Valerie Lemercier. Starring: Valerie Lemercier, Sylvain Marcel, Danielle Fichand, Roc Lafortune Based on the life story of Canadian singing sensation Aline Dieu. Quebec, the 60s, Sylvette and Angloward welcome their fourteenth child, Aline. In this modest family, music is king. When a producer discovers Aline and her golden voice, he has only one idea in mind to make her greatest singer in the world. Supported by her family, guided GuyClaude’s experience and budding love for her, Aline will create an extraordinary destiny for herself.

AZNAVOUR BY CHARLES Directed by Marc di Domenico, Charles Aznavour Starring: Romain Duris, Marie Montoya, Michel Klochendler. In 1948, Edith Piaf offered a Paillard-Bolex camera to Charles Aznavour, which would always be with him. Until 1982, Charles would shoot hours and hours of material which would become the corpus of film diary.

A BRIGHTER TOMORROW Directed by Yassine Qnia Starring: Soufiane Guereab, Souheila Yacoub Thibault Gathalfaud, M’Barek Belkouk Thirty-something Mendi is a safecracker. He and his mates are just trying to get by but robbery isn’t paying like it used to day-to-day. Mendi tries to be a good son to his mother and a good father to his one -year-old to win back his ex – Sarah.

A PERFECT FAMILY Directed by Kike Maillo Starring: Tomasz Kot Successful architect Jeremy Angust is approached on his trip to Paris International Airport by a chatty woman named Texel Textor. She is an outcast who seems to be looking for a captive audience. She forces to listen to her strange stories. Jeremy misses his flight because of Texel, and once seated in the lounge area, he will will not be able to get rid of the annoying stranger. Although the meeting seems fortunate. Soon the nature pf this encounter turns into something much more sinister and criminal. 16