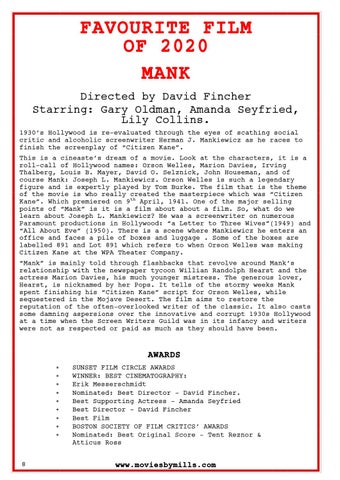 FAVOURITE FILM OF 2020 MANK Directed by David Fincher Starring: Gary Oldman, Amanda Seyfried, Lily Collins. 1930’s Hollywood is re-evaluated through the eyes of scathing social critic and alcoholic screenwriter Herman J. Mankiewicz as he races to finish the screenplay of “Citizen Kane”. This is a cineaste’s dream of a movie. Look at the characters, it is a roll-call of Hollywood names: Orson Welles, Marion Davies, Irving Thalberg, Louis B. Mayer, David O. Selznick, John Houseman, and of course Mank: Joseph L. Mankiewicz. Orson Welles is such a legendary figure and is expertly played by Tom Burke. The film that is the theme of the movie is who really created the masterpiece which was “Citizen Kane”. Which premiered on 9th April, 1941. One of the major selling points of “Mank” is it is a film about about a film. So, what do we learn about Joseph L. Mankiewicz? He was a screenwriter on numerous Paramount productions in Hollywood: “a Letter to Three Wives”(1949) and “All About Eve” (1950). There is a scene where Mankiewicz he enters an office and faces a pile of boxes and luggage . Some of the boxes are labelled 891 and Lot 891 which refers to when Orson Welles was making Citizen Kane at the WPA Theater Company. “Mank” is mainly told through flashbacks that revolve around Mank’s relationship with the newspaper tycoon Willian Randolph Hearst and the actress Marion Davies, his much younger mistress. The generous lover, Hearst, is nicknamed by her Pops. It tells of the stormy weeks Mank spent finishing his “Citizen Kane” script for Orson Welles, while sequestered in the Mojave Desert. The film aims to restore the reputation of the often-overlooked writer of the classic. It also casts some damning aspersions over the innovative and corrupt 1930s Hollywood at a time when the Screen Writers Guild was in its infancy and writers were not as respected or paid as much as they should have been.