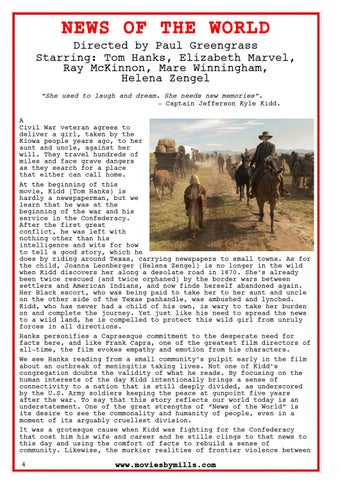 NEWS OF THE WORLD Directed by Paul Greengrass Starring: Tom Hanks, Elizabeth Marvel, Ray McKinnon, Mare Winningham, Helena Zengel “She used to laugh and dream. She needs new memories”. - Captain Jefferson Kyle Kidd. A Civil War veteran agrees to deliver a girl, taken by the Kiowa people years ago, to her aunt and uncle, against her will. They travel hundreds of miles and face grave dangers as they search for a place that either can call home. At the beginning of this movie, Kidd (Tom Hanks) is hardly a newspaperman, but we learn that he was at the beginning of the war and his service in the Confederacy. After the first great conflict, he was left with nothing other than his intelligence and wits for how to tell a good story, which he does by riding around Texas, carrying newspapers to small towns. As for the child, Joanna Leonberger (Helena Zengel) is no longer in the wild when Kidd discovers her along a desolate road in 1870. She’s already been twice rescued (and twice orphaned) by the border wars between settlers and American Indians, and now finds herself abandoned again. Her Black escort, who was being paid to take her to her aunt and uncle on the other side of the Texas panhandle, was ambushed and lynched. Kidd, who has never had a child of his own, is wary to take her burden on and complete the journey. Yet just like his need to spread the news to a wild land, he is compelled to protect this wild girl from unruly forces in all directions. Hanks personifies a Capraesque commitment to the desperate need for facts here, and like Frank Capra, one of the greatest film directors of all-time, the film evokes empathy and emotion from his characters. We see Hanks reading from a small community’s pulpit early in the film about an outbreak of meningitis taking lives. Not one of Kidd’s congregation doubts the validity of what he reads. By focusing on the human interests of the day Kidd intentionally brings a sense of connectivity to a nation that is still deeply divided, as underscored by the U.S. Army soldiers keeping the peace at gunpoint five years after the war. To say that this story reflects our world today is an understatement. One of the great strengths of “News of the World” is its desire to see the commonality and humanity of people, even in a moment of its arguably cruellest division. It was a grotesque cause when Kidd was fighting for the Confederacy that cost him his wife and career and he stills clings to that news to this day and using the comfort of facts to rebuild a sense of community. Likewise, the murkier realities of frontier violence between 4