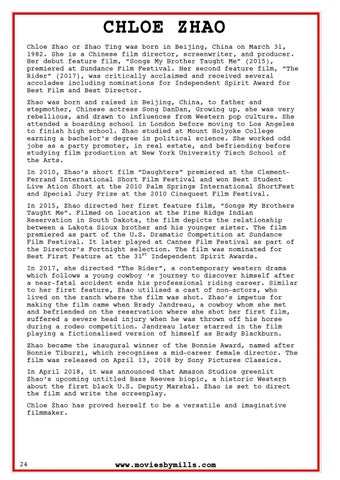 CHLOE ZHAO Chloe Zhao or Zhao Ting was born in Beijing, China on March 31, 1982. She is a Chinese film director, screenwriter, and producer. Her debut feature film, “Songs My Brother Taught Me” (2015), premiered at Sundance Film Festival. Her second feature film, “The Rider” (2017), was critically acclaimed and received several accolades including nominations for Independent Spirit Award for Best Film and Best Director. Zhao was born and raised in Beijing, China, to father and stepmother, Chinese actress Song DanDan, Growing up, she was very rebellious, and drawn to influences from Western pop culture. She attended a boarding school in London before moving to Los Angeles to finish high school. Zhao studied at Mount Holyoke College earning a bachelor’s degree in political science. She worked odd jobs as a party promoter, in real estate, and befriending before studying film production at New York University Tisch School of the Arts. In 2010, Zhao’s short film “Daughters” premiered at the ClementFerrand International Short Film Festival and won Best Student Live Ation Short at the 2010 Palm Springs International ShortFest and Special Jury Prize at the 2010 Cinequest Film Festival. In 2015, Zhao directed her first feature film, “Songs My Brothers Taught Me”. Filmed on location at the Pine Ridge Indian Reservation in South Dakota, the film depicts the relationship between a Lakota Sioux brother and his younger sister. The film premiered as part of the U.S. Dramatic Competition at Sundance Film Festival. It later played at Cannes Film Festival as part of the Director’s Fortnight selection. The film was nominated for Best First Feature at the 31st Independent Spirit Awards. In 2017, she directed “The Rider”, a contemporary western drama which follows a young cowboy ‘s journey to discover himself after a near-fatal accident ends his professional riding career. Similar to her first feature, Zhao utilised a cast of non-actors, who lived on the ranch where the film was shot. Zhao’s impetus for making the film came when Brady Jandreau, a cowboy whom she met and befriended on the reservation where she shot her first film, suffered a severe head injury when he was thrown off his horse during a rodeo competition. Jandreau later starred in the film playing a fictionalised version of himself as Brady Blackburn. Zhao became the inaugural winner of the Bonnie Award, named after Bonnie Tiburzi, which recognises a mid-career female director. The film was released on April 13, 2018 by Sony Pictures Classics. In April 2018, it was announced that Amazon Studios greenlit Zhao’s upcoming untitled Bass Reeves biopic, a historic Western about the first black U.S. Deputy Marshal. Zhao is set to direct the film and write the screenplay. Chloe Zhao has proved herself to be a versatile and imaginative filmmaker.