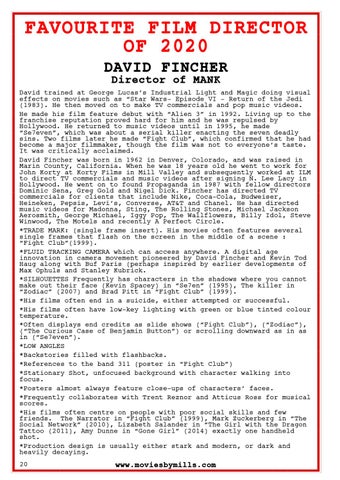 FAVOURITE FILM DIRECTOR OF 2020 DAVID FINCHER Director of MANK David trained at George Lucas’s Industrial Light and Magic doing visual effects on movies such as “Star Wars- Episode VI – Return of the Jedi (1983). He then moved on to make TV commercials and pop music videos. He made his film feature debut with “Alien 3” in 1992. Living up to the franchise reputation proved hard for him and he was repulsed by Hollywood. He returned to music videos until in 1995, he made “Se7even”, which was about a serial killer enacting the seven deadly sins. Two films later he made “Fight Club”, which confirmed that he had become a major filmmaker, though the film was not to everyone’s taste. It was critically acclaimed. David Fincher was born in 1962 in Denver, Colorado, and was raised in Marin County, California. When he was 18 years old he went to work for John Korty at Korty Films in Mill Valley and subsequently worked at ILM to direct TV commercials and music videos after signing N. Lee Lacy in Hollywood. He went on to found Propaganda in 1987 with fellow directors Dominic Sena, Greg Gold and Nigel Dick. Fincher has directed TV commercials for clients that include Nike, Coca-Cola, Budweiser, Heineken, Pepsis, Levi’s, Converse, AT&T and Chanel. He has directed music videos for Madonna, Sting, The Rolling Stones, Michael Jackson Aerosmith, George Michael, Iggy Pop, The Wallflowers, Billy Idol, Steve Winwood, The Motels and recently A Perfect Circle. *TRADE MARK: (single frame insert). His movies often features several single frames that flash on the screen in the middle of a scene : “Fight Club”(1999). *FLUID TRACKING CAMERA which can access anywhere. A digital age innovation in camera movement pioneered by David Fincher and Kevin Tod Haug along with Buf Paris (perhaps inspired by earlier developments of Max Ophuls and Stanley Kubrick. *SILHOUETTES Frequently has characters in the shadows where you cannot make out their face (Kevin Spacey) in “Se7en” (1995), The killer in “Zodiac” (2007) and Brad Pitt in “Fight Club” (1999). *His films often end in a suicide, either attempted or successful. *His films often have low-key lighting with green or blue tinted colour temperature. *Often displays end credits as slide shows (“Fight Club”), (“Zodiac”), (“The Curious Case of Benjamin Button”) or scrolling downward as in as in (“Se7even”). *LOW ANGLES *Backstories filled with flashbacks. *References to the band 311 (poster in “Fight Club”) *Stationary Shot, unfocused background with character walking into focus. *Posters almost always feature close-ups of characters’ faces. *Frequently collaborates with Trent Reznor and Atticus Ross for musical scores. *His films often centre on people with poor social skills and few friends. The Narrator in “Fight Club” (1999), Mark Zuckerberg in “The Social Network” (2010), Lizabeth Salander in “The Girl with the Dragon Tattoo (2011), Amy Dunne in “Gone Girl” (2014) exactly one handheld shot. *Production design is usually either stark and modern, or dark and heavily decaying. 20