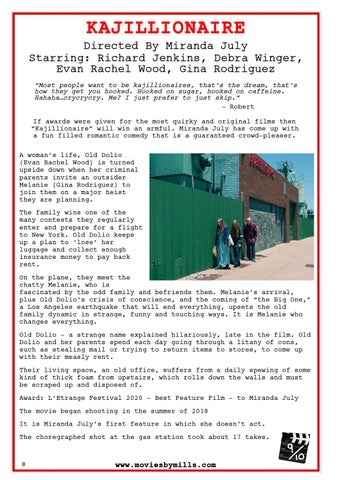 KAJILLIONAIRE Directed By Miranda July Starring: Richard Jenkins, Debra Winger, Evan Rachel Wood, Gina Rodriguez “Most people want to be kajillionaires, that’s the dream, that’s how they get you hooked. Hooked on sugar, hooked on caffeine. Hahaha…crycrycry. Me? I just prefer to just skip.” - Robert If awards were given for the most quirky and original films then “Kajillionaire” will win an armful. Miranda July has come up with a fun filled romantic comedy that is a guaranteed crowd-pleaser. A woman’s life, Old Dolio (Evan Rachel Wood) is turned upside down when her criminal parents invite an outsider Melanie (Gina Rodriguez) to join them on a major heist they are planning. The family wins one of the many contests they regularly enter and prepare for a flight to New York. Old Dolio keeps up a plan to ‘lose’ her luggage and collect enough insurance money to pay back rent. On the plane, they meet the chatty Melanie, who is fascinated by the odd family and befriends them. Melanie’s arrival, plus Old Dolio’s crisis of conscience, and the coming of “the Big One,” a Los Angeles earthquake that will end everything, upsets the old family dynamic in strange, funny and touching ways. It is Melanie who changes everything. Old Dolio – a strange name explained hilariously, late in the film. Old Dolio and her parents spend each day going through a litany of cons, such as stealing mail or trying to return items to stores, to come up with their measly rent. Their living space, an old office, suffers from a daily spewing of some kind of thick foam from upstairs, which rolls down the walls and must be scraped up and disposed of. Award: L’Etrange Festival 2020 – Best Feature Film – to Miranda July The movie began shooting in the summer of 2018 It is Miranda July’s first feature in which she doesn’t act. The choregraphed shot at the gas station took about 17 takes.