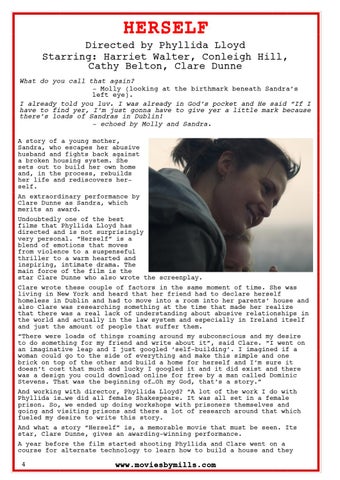 HERSELF Directed by Phyllida Lloyd Starring: Harriet Walter, Conleigh Hill, Cathy Belton, Clare Dunne What do you call that again? - Molly (looking at the birthmark beneath Sandra’s left eye). I already told you luv. I was already in God’s pocket and He said “If I have to find yer, I’m just gonna have to give yer a little mark because there’s loads of Sandras in Dublin! - echoed by Molly and Sandra. A story of a young mother, Sandra, who escapes her abusive husband and fights back against a broken housing system. She sets out to build her own home and, in the process, rebuilds her life and rediscovers herself. An extraordinary performance by Clare Dunne as Sandra, which merits an award. Undoubtedly one of the best films that Phyllida Lloyd has directed and is not surprisingly very personal. “Herself” is a blend of emotions that moves from violence to a suspenseful thriller to a warm hearted and inspiring, intimate drama. The main force of the film is the star Clare Dunne who also wrote the screenplay. Clare wrote these couple of factors in the same moment of time. She was living in New York and heard that her friend had to declare herself homeless in Dublin and had to move into a room into her parents’ house and also Clare was researching something at the time that made her realize that there was a real lack of understanding about abusive relationships in the world and actually in the law system and especially in Ireland itself and just the amount of people that suffer them. “There were loads of things roaming around my subconscious and my desire to do something for my friend and write about it”, said Clare. “I went on an imaginative leap and I just googled ‘self-building’. I imagined if a woman could go to the side of everything and make this simple and one brick on top of the other and build a home for herself and I’m sure it doesn’t cost that much and lucky I googled it and it did exist and there was a design you could download online for free by a man called Dominic Stevens. That was the beginning of…Oh my God, that’s a story.” And working with director, Phyllida Lloyd? “A lot of the work I do with Phyllida is…we did all female Shakespeare. It was all set in a female prison. So, we ended up doing workshops with prisoners themselves and going and visiting prisons and there a lot of research around that which fueled my desire to write this story. And what a story “Herself” is, a memorable movie that must be seen. Its star, Clare Dunne, gives an awarding-winning performance. A year before the film started shooting Phyllida and Clare went on a course for alternate technology to learn how to build a house and they