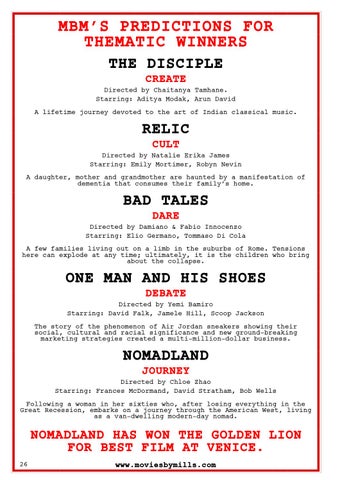 RELIC CULT Directed by Natalie Erika James Starring: Emily Mortimer, Robyn Nevin A daughter, mother and grandmother are haunted by a manifestation of dementia that consumes their family’s home.

BAD TALES DARE Directed by Damiano & Fabio Innocenzo Starring: Elio Germano, Tommaso Di Cola A few families living out on a limb in the suburbs of Rome. Tensions here can explode at any time; ultimately, it is the children who bring about the collapse.

NOMADLAND JOURNEY Directed by Chloe Zhao Starring: Frances McDormand, David Stratham, Bob Wells Following a woman in her sixties who, after losing everything in the Great Recession, embarks on a journey through the American West, living as a van-dwelling modern-day nomad.

NOMADLAND HAS WON THE GOLDEN LION FOR BEST FILM AT VENICE. 26