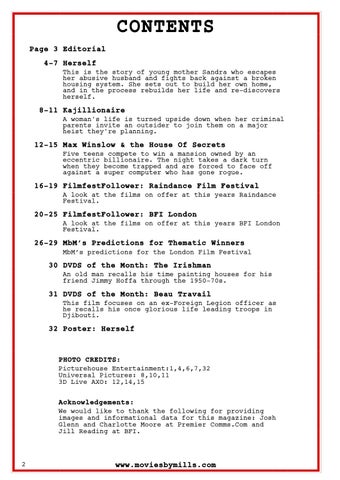 CONTENTS Page 3 Editorial 4-7 Herself This is the story of young mother Sandra who escapes her abusive husband and fights back against a broken housing system. She sets out to build her own home, and in the process rebuilds her life and re-discovers herself.

8-11 Kajillionaire A woman's life is turned upside down when her criminal parents invite an outsider to join them on a major heist they're planning.

12-15 Max Winslow & the House Of Secrets Five teens compete to win a mansion owned by an eccentric billionaire. The night takes a dark turn when they become trapped and are forced to face off against a super computer who has gone rogue.

16-19 FilmfestFollower: Raindance Film Festival A look at the films on offer at this years Raindance Festival.

20-25 FilmfestFollower: BFI London A look at the films on offer at this years BFI London Festival.

30 DVDS of the Month: The Irishman An old man recalls his time painting houses for his friend Jimmy Hoffa through the 1950-70s.

31 DVDS of the Month: Beau Travail This film focuses on an ex-Foreign Legion officer as he recalls his once glorious life leading troops in Djibouti.

Acknowledgements: We would like to thank the following for providing images and informational data for this magazine: Josh Glenn and Charlotte Moore at Premier Comms.Com and Jill Reading at BFI.